Modern Family dad Phil Dunphy (Ty Burrell) will be rushed to the hospital on Wednesday night's episode of the ABC sitcom.

Based on the photos and synopsis released by the network, the Pritchett/Dunphy family is shown celebrating a birthday when Phil contracts "intense stomach pains."

Gloria Pritchett (Sofía Vergara) rushes him to the hospital in what appears to be a scary scene. Phil is shown being wheeled into a hospital while grimacing in pain as Gloria panics. 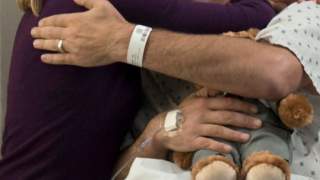 However, it appears things turn out alright. Further photos show Phil in a hospital room in better spirits. His wife Claire (Julie Bowen) is there comforting him and the rest of the clan soon follows.

The episode, entitled "Dear Beloved Family," is the 200th episode of the series, so it's expected that the experience will bring the family together and reflect on previous years.

Click the gallery above to see all the photos from the episode.

Everything New Coming to Netflix in September 2022

Trevor Noah Leaving 'The Daily Show' After Nearly a Decade

'Ghosts' on CBS: Easter Eggs in the Season 2 Opening Credits Hint at What's Ahead