Prince Harry and Meghan Markle are officially husband and wife after a beautiful Saturday morning ceremony.

The royals tied the knot at Windsor Castle in a ceremony presided over by the Archbishop of Canterbury, Justin Welby.

Scroll through to see the highlights from the royal wedding, from the couple's arrivals to their first kiss.

The British Royal Family member, now known as The Duke of Sussex, arrived via a black van. His brother Prince William, Duke of Cambridge, was at his side. Both wore the frockcoat uniform of the Blues and Royals.

The most prominent feature of the dress was its elegant train that extended far behind her.

Walking Down the Aisle

Markle's father, Thomas Markle, is currently recovering from heart surgery, so he could not walk her down the aisle.

After much speculation, it was revealed that Prince Charles, her soon-to-be father-in-law would do the honors. That plan came to fruition during the ceremony, and it was one of the most touching parts of the day.

Once Markle arrived at the altar, her groom could not contain his love for her. He whispered a quick message to her that was caught by the cameras.

The emotions from Harry did not stop there.

Not longer after, he appeared to tear up while standing next to his bride. It, too, was caught on camera, leading to another key moment from the ceremony.

After the bride arrived, several ministers spoke, with the most notable one being Michael Curry, a Chicago bishop. His fiery speech was a break from normal traditions, and was all about one thing: love. 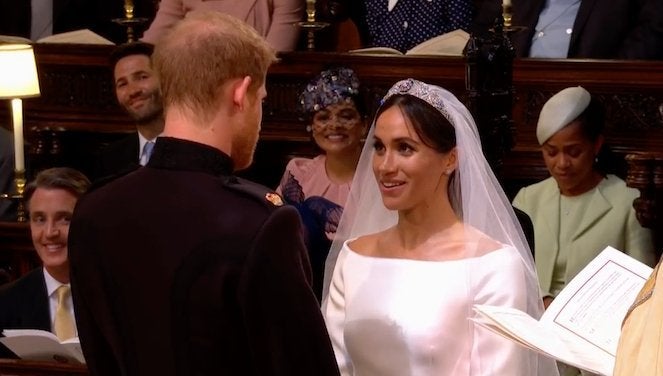 The newly crowned Duke and Duchess of Sussex decided to stick to fairly normal promises in their vows. This was especially true of Harry's vows, with no controversial changes being made.

"I Harry, take you, Meghan, to be my wife, to have and to hold from this day forward," Prince Harry said. "For better, for worse, for richer, for poorer, in sickness and in health, to love and to cherish, till death us do part; according to God's holy law. In the presence of God I make this vow."

Markle's vows were very similar, but they featured one glaring change that had been contested in recent days.

The former Suits actress did not want to vow to "obey" her husband, as it comes off very oppressive to women.

"I Meghan, take you, Harry, to be my husband, to have and to hold from this day forward," Markle said. for better, for worse, for richer, for poorer, in sickness and in health, to love and to cherish, till death us do part; according to God's holy law. In the presence of God I make this vow."

Markle almost suffered an embarrasssing moment during the ceremony.

As Markle left the alter and turned the corner, the dress' long train headed straight towards the corner of the pew.

Luckily for the newest member of the British royal family, a member of her bridal party was in the corner seat and noticed the near disaster.

The woman quickly slid down and guided the train around the corner, preventing it from getting snagged and possibly tearing.

After they each said "I do" and exited the church, the newlyweds stepped outside and shared their first kiss as husband and wife.

From there, the pair hopped into a carriage and began their wedding precession around Windsor Town.

While the couple's first kiss was a momentous occasion, their second of the day was even more romantic.

As they rode through Windsor in a carriage, the two royals kissed again as throngs of admirers cheered them on.

Food Recalls: 6 Products You Should Throw Out Now

The Frozen Pizza Recall From Earlier This Summer Just Got Worse