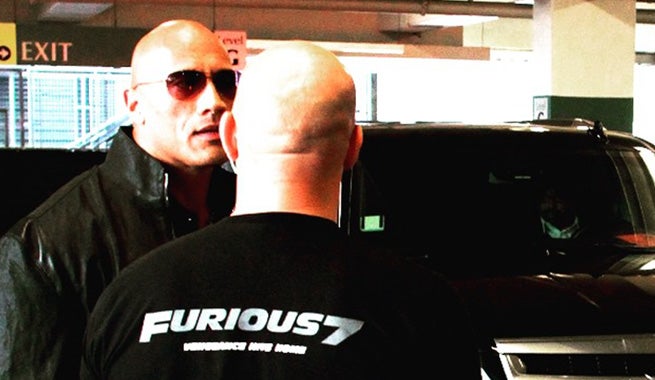 Vin Diesel continues taunting us about Fast & Furious 8. Earlier this week, he teased on Instagram with a photo of a Fast & Furious 8 logo above the New York City skyline which is where the eighth installment is rumored to be taking place. Today, he hopped back on the social media app for another tease - this time about working with Dwayne "The Rock" Johnson.

Last weekend, Johnson confirmed he'll be returning for the franchise's next installment. That return has now been emphasized by Diesel's Instagram photo (shown below) of himself and Johnson with the caption, "Always working... F8..."

The photo was most likely taken while the two were working together on Furious 7 because lately Johnson has been traveling the globe promoting his new film San Andreas. You can catch Johnson's new epic disaster film in theaters today while you wait until April 14, 2017 for Fast & Furious 8.

Are you excited for Fast & Furious 8?

Vin Diesel Teases Working With The Rock On Fast & Furious 8