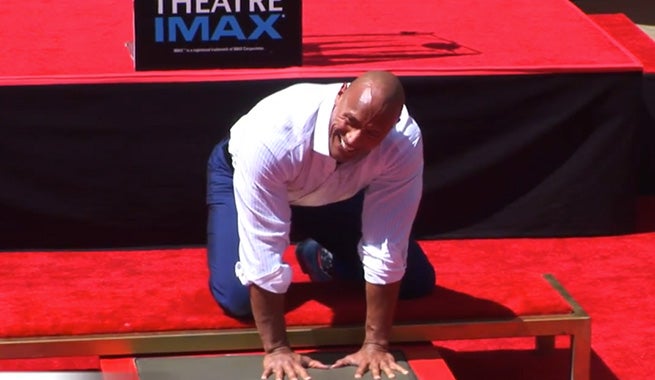 If it wasn't official before, it is now - Dwayne "The Rock" Johnson is famous. On Tuesday, the wrestler turned action movie star had his hands cemented into the sidewalk outside of the famous Chinese Theater on Hollywood Boulevard a.k.a. the Walk of Fame.

Johnson is Hollywood's sweetheart right now, known not only for his crazy action movies and impressive physique but also for the time he takes to genuinely interact with fans despite his constantly busy schedule. After rising to fame in the WWF days of World Wrestling Entertainment, Johnson crossed over into Hollywood movies with his first film being The Mummy Returns and followed by it's prequel, The Scorpion King.

His acting career has since skyrocketed. In 2013, Johnson was the highest grossing actor in Hollywood. He had five movies released that year, including Fast 6, Snitch, and Pain & Gain. Since, he has headlined a Hercules film and will soon be playing the hero in the disaster film, San Andreas. In the coming years, he'll be making his debut into super hero movies when he takes on the role of Black Adam in DC Comics and Warner Brothers' Shazam in 2019. Watch Dwayne Johnson cement his name, hands, and footprints into eternal film in the video below. You'll want to skip to about half-way through at the 25 minute mark to actually get to Johnson.

Johnson be seen next saving his family in San Andreas when it hits theaters May 29, then again on HBO's upcoming Ballers series, June 21.

The Rock Puts Handprints In Cement At TCL Chinese Theatre

Britney Spears Locked Herself in Her Bathroom Overnight, Recounts Ordeal on Instagram