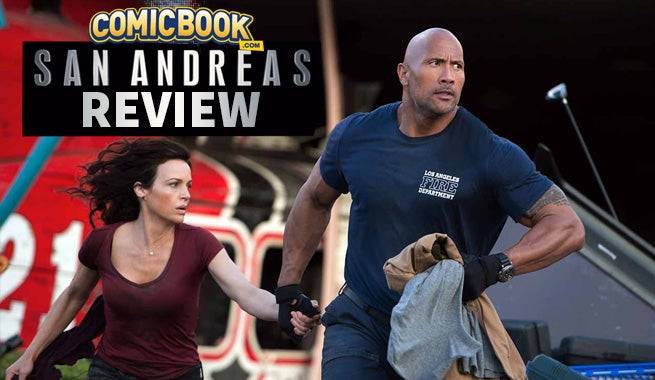 Following the lackluster opening weekend of Tomorrowland, theaters are opening their doors for another big budget blockbuster movie which isn't a sequel or part of a larger franchise. That's a rarity in 2015 but this weekend's release, San Andreas, certainly has the muscle to fight for a big pay day.

At a glance, San Andreas might seem like a what-you-see-is-what-you-get disaster flick, but once you sit there with it, buy it a drink, and get to know it- San Andreas is much more than meets the eye. Writer Carlton Cuse (LOST, Bates Motel) and director Brad Peyton (Journey 2) managed to infuse San Andreas with layers of life which make watching the complete and utter destruction of California even more enthralling.

Dwayne "The Rock" Johnson dives into the role of rescue pilot Ray Gaines. He's not your average rescue pilot...He's the American Sniper of rescue of pilots with over 600 documented saves. Before you can realize the coming attractions have ended and San Andreas has begun, Ray springs into action to add another to his records.

It's easy to see that Johnson gave his all to this role. He continues making strides in his acting career as far as loosening up and truly capturing the necessary emotions.

Ray's role as a rescue pilot is only a layer of a much larger cake, though. Above all, he is the loving father of Blake (Alexandra Daddario) and soon-to-be ex-husband of Emma (Carla Gugino) against his own true wishes. The dynamic between the family is a focal point of the film as Ray's troubled past bars him from opening up to his wife. It's worth noting Johnson and Gugino worked together five years ago in Faster which may speak to why their chemistry is on point in this one.

The other component of San Andreas is completely unrelated to Ray or his family with the exception of Archie Punjabi's reporter character having interacted with both. Paul Giamatti plays Lawrence, a brilliant and good-hearted scientist who learns how to predict earthquakes moments before the largest in recorded history wreaks havoc throughout California. Never once do Giamatti and Johnson share the screen or even interact. In fact, San Andreas would have been just fine without Lawrence describing the enormity of the event or what was coming next but during the two-hour chaos fest the time spent away from the destruction is a breath of fresh air.

Rather than take out Giamatti's story line, the one thing San Andreas should have eliminated is the forced romance between Blake and her new European buddy, Ben (Hugo Johnstone-Burt). Throughout the disaster, Blake is separated from her father but uses the skills he taught to her to lead the trio of herself, Ben and Ben's little brother (Art Parkinson). The characters and their journey were all well and good but the shy fervor Ben has for Blake probably would have been much less prominent in a true do-anything-to-survive situation.

While there's no astounding growth or arc in particular, the characters are delightfully memorable. Speaking of memorable, the most memorable aspect of San Andreas has to be the special effects. Visually, Brad Peyton, his cinematographer Steve Yedlin (who is set to take on Star Wars: Episode VIII), and the effects team put together one of the most visually stunning films in recent years. Even on the heels of the impressive, practical, stunt crazy Mad Max: Fury Road, San Andreas offers the best visuals audiences will want to feast their eyes on more than once. Even from the roof tops of buildings, no detail is spared as cars crash and humanity perils into mayhem on the ground levels of Los Angeles and San Francisco.

San Andreas may not be perfect, but mixed into it's chaos and destruction are layers of heart and well-written plot. Never is there an easy way out or questionable character choice. Johnson pours everything he has into the role much like his character does with rescuing civilians and especially his family. The spectacle deserves to be watched on the biggest, highest quality screen possible surrounded by the loudest speakers in town.

Bottom Line: San Andreas is an epic, visually engrossing disaster movie with loads of delightful and necessary heart and story. 8.0/10

'Y: The Last Man' Finally Has a Trailer Ahead of Premiere

Vanessa Bryant Settles Lawsuit Filed Against Her by Own Mother