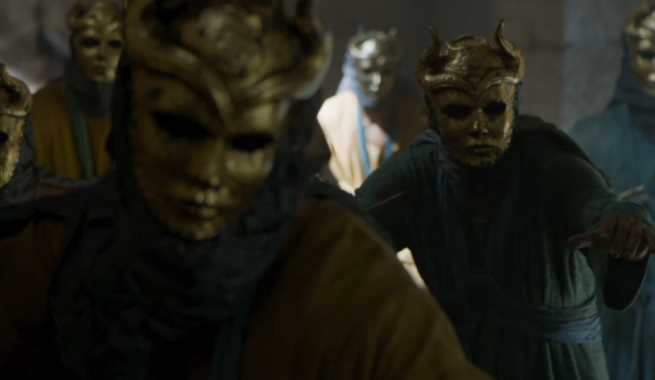 She’s won the heart of a Dothraki Khal and conquered cities around Slaver’s Bay, but Daenerys Targaryen may have met her greatest challenge yet in a new faction introduced in the Game of Thrones Season 5 premiere episode, “The Wars To Come,” called the Sons of the Harpy.

So who are the Son of the Harpy? We’ll explain below, but beware that we’re drawing on knowledge from the A Song of Ice and Fire books, so possible SPOILERS may lie ahead.

As Dany has made her way through Slaver’s Bay, she’s freed many peoples from many cities, but she’s never really stuck around to deal with the consequences. We got our first hint of that at the end of Season 4, when Dany learned about how the power vacuum she left in Yunkai had caused chaos in the city. Now that she’s chosen to rule in Meereen, she’s seeing the aftermath of her slave liberation first hand.

The Sons of the Harpy are waging a shadow war against Dany and her allies in the city. The masks they wear make them difficult to identify, and often they are middle-class citizens, but Dany and her allies suspect that they are doing the bidding of some of the great noble houses of Meereen, who suffered most from the loss of their slaves.

This next bit is potentially a big SPOILER, so here’s another warning.

One of the houses believed to be involved with the Sons of the Harpy is House Loraq. This is the house that Hizdahr zo Loraq, who has been acting as a diplomat and negotiator for Dany, belongs to. Some, both fans and characters in the books, speculate that Hizdahr may actually be the Harpy himself, manipulating both sides of the conflict in a way that helps gain him power.

This theory remains unconfirmed, even in the books, book keep an eye on Hizdahr going forward. Even if he’s not the Harpy, he’s more cunning than Dany suspects.

Game Of Thrones: Who Are The Sons Of The Harpy?

Britney Spears Locked Herself in Her Bathroom Overnight, Recounts Ordeal on Instagram