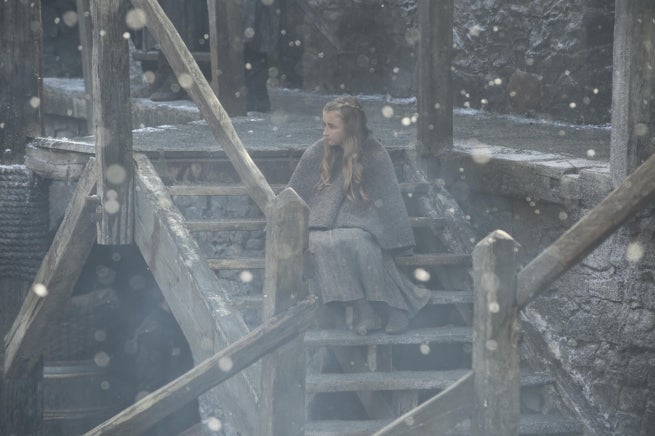 A fisherman is unloading his haul, until he’s knocked out – and paid – by Jorah Mormont. Tyrion struggles, unsuccessfully, to cut the rope binding his hands together. Jorah loads Tyrion into the fisherman’s ship and shoves off.

Jaime Lannister sails towards Dorne. He sees Tarth, Brienne’s home, in the distance. Below-deck, Jaime and Bronn discuss how crazy Dorne is. Bronn doesn’t understand why they’re on a merchant ship or why Jaime didn’t just send a fleet. Jaime says he’s going to rescue his niece, and Bronn says something to let on that he knows about Myrcella’s true parentage. Jaime says it just has to be him that goes to Dorne, and Bronn realizes that Jaime set Tyrion free. Jaime says that Tyrion murdered his father and that if he ever sees Tyrion again he will split him in two.

At a Small Council meeting, Cersei and Mace Tyrell discuss the crown’s debt to the Iron Bank of Braavos. Mace offers to loan the crown more gold, but Cersei says they need to negotiate new terms with the bank in person. She sends Mace on a trip to Braavos, with Ser Meryn Trant as “guard.”

Cersei meets with the High Sparrow. Cersei notes that holy men and women have been targeted for attacks, murders, pillaging and rape. Cersei recommends rebuilding the Faith Militant, armed forces in the service of the faith, and suggests the High Sparrow to become the new High Septon.

The Sparrows, now with the seven-pointed star carved into their heads, storm through the streets, breaking casks of ale and wine, overturning tables, and pulling prostitutes into the street. The gold cloaks turn a blind eye. Finally, they take hold of Loras Tyrell.

Margaery bursts into Tommen’s room and demands to know why Loras is in a cell. Tommen is an oblivious and Margaery tries to explain it to him. He’s too naïve to understand, and Margaery regains her composure and tries sweetness instead.

Tommen bursts in on his mother and demands that Loras be set free. Cersei explains that she wasn’t the one who arrested him, but Tommen knows she armed the Faith Militant. Cersei says if Tommen talks to the High Sparrow, she’s sure Loras will be released.

Tommen goes to the Great Sept, but is blocked by the Faith Militant. There’s a standoff between the Faith Militant and the Kingsguard, and the crowd begins to shout that Tommen is a bastard and an abomination. Tommen backs down.

Tommen returns and tells Maragery there was no way to get Loras out without violence. Margaery says he’s the king and he let a rabble stop him. Margaery leaves to send word to her grandmother.

Stannis and Selyse discuss Jon Snow. Stannis doesn’t think the stories of Jon’s mother being a commoner are true, saying that it wasn’t Ned’s way. Selyse regrets not giving Stannis a son. Melisandre interrupts, and says she needs to serve her lord.

Jon signs requests for men that Sam is sending out to every house they can. Jon sees one written to Roose Bolton, and refuses to sign. Sam talks him into it, though Jon isn’t happy about it. Sam is leaving as Melisandre walks in. Melisandre offers to bring Jon home to Winterfell, but Jon says his home is Castle Black. Melisandre says the only true war is life vs. death. She wants to show Jon something. Jon assumes it’s a vision in the fire, from magic, but Melisandre says its only life. She opens the front of her dress and places Jon’s hand on her breast, asking if he can feel her heart beating. She encourages him to embrace the power within him. He pulls away, but Melisandre straddles him. Jon says he doesn’t think Stannis would like this very much. Melisandre says not to tell Stannis then. Jon remembers Ygritte, says he still loves her, and stops Melisandre. Melisandre walks away, but turns in the doorway and says “you know nothing Jon Snow.”

Shireen enters her father’s quarters. Shireen tells Stannis that Selyse told her she didn’t want to bring her. Shireen asks if Stannis is ashamed of her. Stannis tells the story of a Dornish trader who landed at Dragonstone. Everything he had was junk except a doll with Stannis’ house colors on it. Shireen loved the doll, but it carried the greyscale. Everyone told Stannis to send Shireen to live with the Stone Men. He refused, and called in every maester and resource he could to stop the scale from spreading and save his daughter.

Sansa lights candles in the crypt beneath Winterfell. She finds a feather near the tomb of Lyanna, and then Littlefinger finds her there. Sansa says her father never talked about Lyanna. Petyr remembers seeing her once at a tournament. Rhaegar Targaryen won and everyone cheered, until Rhaegar road right past his wife, Elia Martell, to give a crown of winter roses to Lyanna. Littlefinger wonders how many died because Rhaegar chose Lyanna, and Sansa reminds him that she was kidnaped and raped. Littlefinger tells Sansa that he’s going to King’s Landing. Sansa doesn’t want to be left with the Boltons, but Littlefinger says it won’t be for long. Stannis will march on King’s Landing before winter comes, but he must take Winterfell first. Petyr believes Stannis will succeed, rescue Sansa, and name her Wardeness of the North. If that doesn’t pan out, Sansa should take Ramsay and make the boy her own. Littlefinger kisses Sansa on the lips, and tells her the North will be hers. Sansa says she expects she’ll be a married woman by the time Littlefinger returns.

Bronn rows himself and Jaime to shore. The next morning, Jaime wakes up to Bronn killing a snake right beside his head. They eat it for breakfast, and Bronn says he wants to die in a boring way, in his own keep while his kids fight over his fortune. Jaime says he wants to die in the arms of the woman he loves. Bronn asks if that woman wants the same thing. Bronn wonders what’s to stop the captain of the ship they were on from telling Dorne that they’re here, just as several Dornish riders show up. The riders surround them, and Bronn makes up a story with fake names. The riders still demand that Bronn and Jaime throw their swords in the sand. Bronn feigns compliance, then attacks with a dagger. They fight, Jaimie doing so awkwardly with his one hand, but manages to stop a killing blow with his gold hand and land a counterstrike. They take the Dornish horses to make for the Water Gardens.

Ellaria Sand meets with the Sand Snakes. Ellaria tells them that Doran will not go to war, that they’ll have to get revenge themselves. The Sand Snakes have the captain from Jaime’s boat. They realize Jaime is here for Myrcella, and that it is now a race to take her for revenge. Obara kills the captain.

Jorah is at sail with Tyrion. Tyrion finally annoys Jorah enough that Jorah takes the gag out from Tyrion’s mouth. Tyrion asks who Jorah is and if he has wine, but Jorah remains cold and unhelpful. Tyrion tells Jorah he’s going the wrong way to get to Westeros, and Jorah tells him he’s sailing to Dany, not Cersei. Tyrion laughs, as he was heading to Dany anyway. Tyrion pieces together who Jorah is, and wonders why Jorah was running from Dany. Tyrion remembers that Jorah was spying on Dany for Varys, and that Dany must have found out and exiled him. Tyrion warns that Jorah’s plan to win back favor might backfire, but Jorah just hits him.

Dany overlooks Meereen from the Great Pyramid, and Selmy recalls a story of Dany’s brother singing in the streets of King’s Landing. Daario interrupts to tell her Hizdahr is waiting in the audience chamber with 50 or 100 others.

Hizdahr continues to argue for the opening of the fighting pits. It is the traditional start of the fighting season, and Hizdahr warns that these traditions are all that holds the city together. The Sons of the Harpy move through the city, find some of Dany’s men, and kill them. A prostitute tricks the Unsullied into falling into a trap set the by the Sons. The two sides fight. Selmy is in the street and hears the panic. He pulls his sword and heads towards it. Grey Worm is stabbed in the skirmish, but fights on. Grey Worm is the last Unsullied standing, surrounded by Sons of the Harpy. Selmy shows up and joins the fight, taking down many of the remaining Sons before he is overwhelmed. Grey Worm kills the last of them, and falls unconscious next to Selmy in the street.

Game Of Thrones Season 5 Episode 4: The Sons Of The Harpy Recap With Spoilers