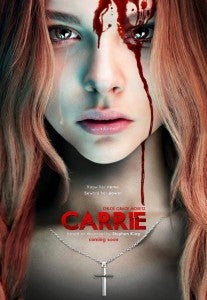 Sony Pictures announced today that it was adjusting its upcoming release slate and pushing the upcoming remake of Stephen King's Carrie to October 18, 2013. The film was previously scheduled to open on March 15, a date that will now go to the Halle Berry movie The Call, formerly known as The Hive. Little is known about that movie, except the logline provided for its IMDb page, which is, "In order to save a young girl's life, an emergency operator must confront a killer from her past." It's usually not a good sign when a movie is pushed back so close to its release date; it was widely regarded as a sign of serious trouble when G.I. Joe: Retaliation was delayed just prior to its release date last year. The studio cited a desire to punch up the 3-D, but insiders suggested much bigger changes were being made to the film following some pretty brutal test screenings. Carrie hasn't had any such rumors swirling around it, although both it and Sony's remake of The Evil Dead have many fans wondering whether they're really necessary. The October 18 release date not only puts Carrie in line to open closer to Halloween, when horror movies traditionally have a fairly decent chance of doing well, but it will make the movie Sony's first big release follwing New York Comic Con 2013, which takes place October 10-13. Carrie had a pretty good showing at New York Comic Con this year, where a teaser trailer and some footage was screened in addition to a Q&A from some of the creators involved. With that as background and a lot of pent-up fans itching for some footage, don't be surprised if Sony elects to screen the movie in the hopes of getting some positive buzz out of the convention's news coverage.

Everything Leaving Netflix in January 2023

'Sister Wives': Christine Brown Has New Boyfriend in Wake of Split From Cody