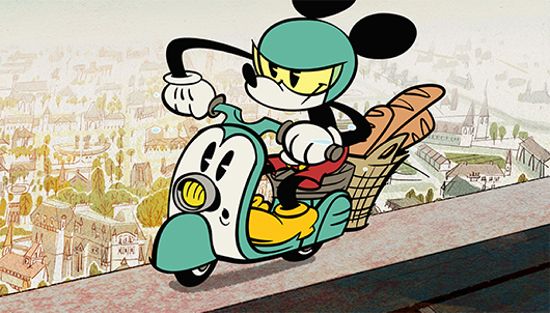 Fans don't often respond well when companies attempt to modernize something that has been a part of their lives for ages. There was of course the whole New Coke debacle. And in the world of comic books and cartoons in specific, fans can be particularly resistant to change. Something as simple as whether Batman has a yellow circle around his chest logo or whether Superman is wearing red trunks can result in a major outcry. And heaven help anyone who tries to put pants on Wonder Woman. Well, today, Disney announced that they would throw caution to the wind and give Mickey Mouse a new look in some brand new Mickey Mouse cartoon shorts, which will be produced in 2D animation. While many are describing Mickey Mouse's new look as modernized, it is largely based on the style of Mickey Mouse's 1930s design. However, there have been a few contemporary touches added. According to Disney, designs for the other characters in the cartoon short have also been modified, creating a "rubber-hose" cartoon style for more exaggerated animation. The background designs on the cartoons are being done in a 1950s and 1960s style. Disney also plans to include other icons from their storied heritage in the cartoons. The cartoon shorts are set in different regions including Santa Monica, New York, Paris, Beijing, Tokyo, Venice, and the Alps. Artist and director Paul Ruddish of Dexter's Laboratory and The Powerpuff Girls fame is executive producing the cartoon shorts. A sneak preview of the first short premiered on Disney.com today. The "Croissant de Triomphe" short features Mickey as he delivers croissants to Minnie's cafe, battling street traffic and other Parisian obstacles along the way. Other upcoming shorts include "Yodelberg" and "No Service." In "Yodelberg," Mickey longs to visit Minnie atop her mountaintop chalet but quickly realizes that the threat of avalanche has made the trek up the mountain more challenging than usual. In "No Service," Mickey and Donald try to buy lunch from a beachside snack shack but are unceremoniously turned down because of the classic "No shirt, no shoes, no service" admonition (of course, Mickey doesn't wear a shirt and Donald doesn't wear shoes!). So what do you think of combination modernized and retro-look for Mickey Mouse? Do you love it or hate it?  Will the world accept the new Mickey Mouse or reject him? Croissant de Triomphe on Disney Video

Modernized Mickey Mouse: Love Him Or Hate Him?