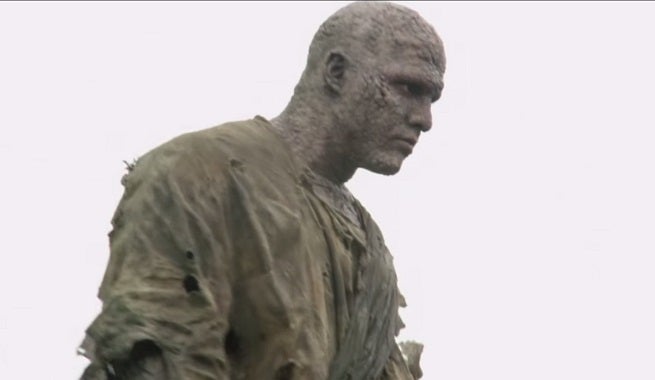 Tonight’s episode of Game of Thrones, “Kill the Boy,” featured the surprise appearance of one of Westeros and Essos’ darker and more dangerous elements, the Stone Men.

While this is the first time the Stone Men have appeared, their existence has been hinted at previously. The Stone Men are in the later stages of the disease called greyscale. This is the same disease that afflicted Shireen, and the spread of her infection was only halted by Stannis gathering the best and brightest from around Westeros to find a way to do so.

Greyscale calcifies the skin, making it look and feel like stone. At first, the change is purely physical, but eventually it taps into the brain, causing insanity. It’s also highly contagious, transferring from one infected to another by simple touch.

This brings us to the Stone Men. Someone in the late stages of greyscale becomes both highly infectious and highly unpredictable, making them a danger to everyone around them. To avoid further contagion, these persons are sent to Valyria, which has been uninhabited by civilization since the Doom, to live out the remainder of their days with others like them.

Check out the videos below to hear creator George R.R. Martin talk about the Stone Men, and to see how the Game of Thrones producers and crew shot the Stone Men’s appearance.

Game Of Thrones: Who Are The Stone Men?