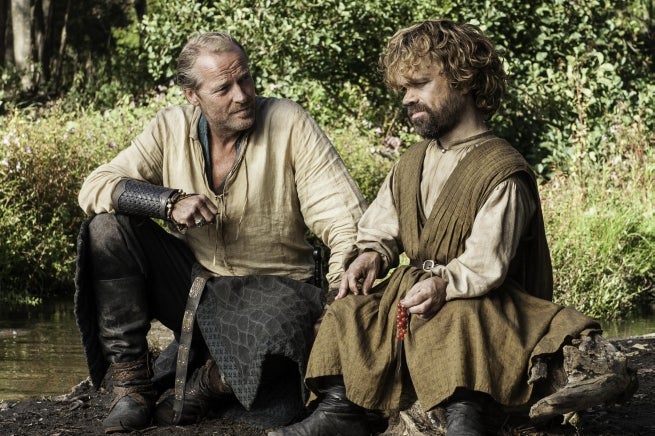 At the House of Black and White, Arya washes and grooms a corpse. Other acolytes come and take it away, leaving the door ajar behind them. Arya approaches the door, when the waif closes and locks it on her. Arya demands to know what happens to the body, but the waif tells her she’s not ready. Arya wants to know when she can play the game, and the waif tells her she’s played and failed several times. The waif asks who Arya. Arya says no one, and the waif just smirks. Arya asks who the waif is. She tells a story of how she’s the daughter of a noble from Westeros. She then asks Arya if she can tell if it was truth or a lie.

Jaqen H’ghar wakes Arya at night and asks who she is. Arya tells him her whole story, but Jaqen just accuses her of lying and swats her. Arya says she’s not playing the game anymore, and Jaqen tells her they are always playing.

Jorah and Tyrion squabble over their travels. Jorah finally asks why Tyrion is in Essos, and Tyrion tells him about how he killed Tywin. Tyrion tells Jorah about how he met Jeor Mormont at the Wall and, without realizes he’s the first to tell Jorah, breaks the news about Jeor’s death.

Arya is scrubbing floors at the House of Black and White when a man carries a sickly girl inside and places her down. The man approaches Arya and greets her with “valar morghulis.” He tells her how the girl is suffering, and how he’s been to every healer and no one can help her. He just wants her suffering to end. Arya sits by the girl and tells her not to be afraid, then tells her a story about she used to be a sickly girl and her father brought her to the House of Black and White and the water there healed her.

After Arya tends to the girl’s body, Jaqen brings Arya deeper into the House. He shows her a massive chamber where the faces of the dead have been cured for use as disguises of the Faceless Men. Jaqen says a girl is not ready to be no one, but she’s ready to be someone else.

Tyrion asks Jorah why he’s so dedicated to Dany when his family fought against the Targaryen’s in Robert’s Rebellion. Jorah says he used to be a cynic before he saw Dany walk out of the fire with her baby dragons. Tyrion questions whether or not Dany should rule Westeros, but Jorah takes him and dives behind a rock. He sees a pirate ship and dives behind a rock, but they’re captured by the pirates. The pirates debate what to do with him. They decide to hang on to Tyrion until they find somewhere to sell his magical penis, and Tyrion convinces them to bring Jorah to fight in the pits in Meereen.

Littlefinger arrives back at King’s Landing and is greeted by Brother Lancel and the Sparrows. They warn him that things have changed in the city and things get tense. Lancel eventually lets him pass.

Littlefinger questions the wisdom of arresting Loras Tyrell. They trade barbs about each other’s choice of companions. Cersei asks if the Vale will come to the aid of the crown, and Littlefinger assures that Lord Robyn heeds his advice to remain loyal to the crown. Littlefinger tells her that he’s learned of Sansa, alive and well at Winterfell and set to marry Ramsay Bolton. Cersei sees it as a betrayal and is prepared to take action, but Petyr councils her to allow Stannis to march on Winterfell first and then follow up quickly after. He tells her to ready Kevan or Jaime Lannister, but they are both unavailable. He offers the soldiers of the Vale. Cersei is skeptical, but Littlefinger asks only to be name Warden of the North. He promises Sansa’s head on a spike.

Trystane puts a flower in Myrcella’s hair and tells her that he’s going to ask for them to be married tomorrow. She questions his motives, but Trystane silences her with a kiss. Myrcella says they can’t yet, but he says they’re betrothed and so it’s okay for them to walk the gardens together. Doran remarks to Areo Hotah that the two make a good, but dangerous, couple and tells Areo they must protect them.

Bronn sings and he and Jaime travel through Dorne, disguised as Dornishmen. They see the Water Gardens in the distance. Ellaria Sand meets with the Sand Snakes. They speak House Martell’s words, then the Snakes cover their faces and enter the Water Gardens, just behind Jaime and Bronn. Jaime and Bronn spot Myrcella making out with Trystane. Myrcella is confused and Trystane introduced himself. Jaime asks for some time alone with Myrcella, but Trystane draws his sword. Bronn knocks him out quickly, then the Sand Snakes strike. Obara fights Jaime while Tyene and Nymeria both fight Bronn. Tyene breaks away and tries to escape with Myrcella when Areo and group of guards arrive and surround them all. They all drop their weapons, though Jaime takes a little extra convincing. The guards find Ellaria and take her as well.

Olenna Tyrell returns to King’s Landing. She tells Margaery that they won’t be able to keep Loras imprisoned, it’s just Cersei trying to drag their family name through the dirt. Olenna meets with Cersei and minces no words. Cersei plays vague and dumb. Olenna warns that the alliance between Tyrells and Lannisters will fall if Loras is imprisoned. Cersei warns that would lead to warfare. Cersei assures Olenna that there will be an inquest and then Loras will be freed.

The High Sparrow leads the inquest against Loras, questioning him about his relationship with Renly and his sexual inclinations. He calls Margaery after dismissing Loras. Margaery calls the charges against her brother lies. He has Margaery swear it before the gods. He then dismisses Margaery and brings in Loras’ squire. The squire admits to his relationship with Loras, and says that Margaery was well aware of it. The squire backs it up by noting Loras’ birthmark. Loras charges at the squire. The High Sparrow announces there will be a formal trial against Loras, as well as Margaery for bearing false witness before the Seven.

Myranda, supposedly sent by Ramsay, goes to Sansa’s room and draws her a bath. While Sansa bathes, Myranda warns Sansa that Ramsay doesn’t like to get bored. She suggests that Sansa doesn’t want to end up like the “others,” and tells Sansa about Ramsay’s past affairs and their grisly ends. Sansa turns the conversation around, asking Myranda how long she’s loved Ramsay. She reminds Myranda that she is Sansa Stark of Winterfell and that she will not be frightened in her own home.

Sansa is dressed in white when Reek finds her to escort her to the Godswood. He asks her to take his arm, but she refuses. Reek begs, saying he’ll punish him, but Sansa doesn’t care. Reek leads Sansa to the Godswood, where the wedding ceremony awaits. As the ceremony begins, Myranda watches with tears in her eyes. Reek chokes out the words as he is forced to speak “Theon of House Greyjoy” and remind himself that he was Ned Stark’s ward. Sansa takes Ramsay as her husband.

Ramsay and Sansa go to the bedroom afterwards. Ramsay wonders why Sansa is still a virgin after being married to Tyrion. She says Tyrion never touched her. Ramsay says they should be honest with each other. He kisses her and then tells her to take off her clothes. Reek turns to leave, but Ramsay commands him to stay and watch. Sansa begins to undress as Reek closes and locks the door. Ramsay tears the back of Sansa’s dress and lays her, face forward on the bed. Reek watches as he takes her.