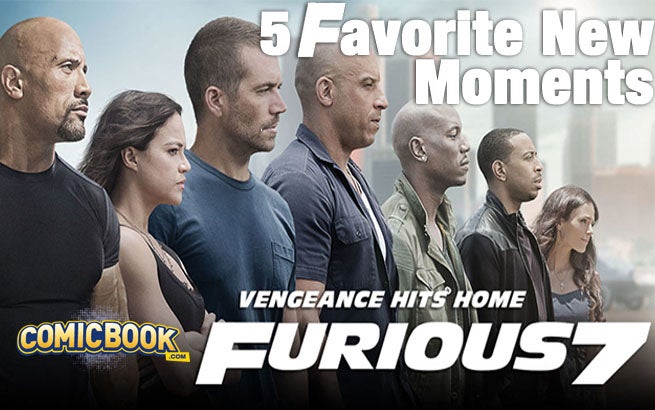 A new Furious 7 trailer hit the internet today, somehow packed with even more action than it's predecessor. Below is a video showcasing 5 new and awesome moments from today's trailer. Warning! The video contains spoilers from previous Fast & Furious movies.

Shaw is a military trained assassin

Hobbs (Dwayne Johnson) gave us some background on exactly what kind of threat Deckard Shaw (Jason Statham) is going to be. Apparently, he's a military trained assassin, and we even got to see him in action.

The trailer showcased a piece of what will surely be an epic scene between Hobbs and Shaw. Seems like an "only one can come out alive," type of fight, too.

Hobbs flies out a window (and survives?!)

Hobbs gets launched out the window of an exploding building, presumably after his fight with Hobbs. He has a woman in his arms and somehow rolls over in the air to land on his back to break her fall.

The title of this moment sounds like the headline of an HBO boxing match. Seeing Letty (Michelle Rodriguez) take on Rousey's character is going to be killer.

They tried to fool us but failed! Shaw gets hit with the most electifying move in all of sports entertainment- The Rock Bottom! Through a table nonetheless!