Watching what you eat and counting calories can be a safe way to lose weight and become a healthier person, but sometimes, those habits can develop into a psychological problem that's both dangerous and difficult to overcome. Binge eating, starvation, and unhealthy views of food can all contribute to the development of an eating disorder, which requires medical treatment.

Sadly, up to 50% of teenage girls and 30 percent of teenage boys use unhealthy manners of weight control, and unfortunately, the reach of eating disorders doesn't halt there. More and more people are erring on the side of too healthy when it comes to creating a diet, and in some cases, their "healthy" habits are destroying their bodies and minds. When this happens, people develop a disorder called orthorexia.

Understanding What Orthorexia Is

You might have heard of eating disorders like anorexia and bulimia, but chances are, you've rarely or never heard people talk about orthorexia. That's because the psychological term was only coined in 1998. As more and more people dive into the world of healthy eating, an increasing number of people are shifting their lifestyle from normal to obsessive.

In general, a person is thought to have orthorexia when they spend more than a handful of hours thinking about the foods they will eat on a given day. People with orthorexia also tend to be overly strict with their diets, condescending to all who don't abide by their healthy-eating rules, and guilty or even self-hating when they accidentally indulge in an fatty or caloric food.

People who are diagnosed with orthorexia also tend to get a bit of an ego boost simply from sticking to their ridiculously strict diet. What they eat becomes a part of their personality, so much so that they enjoy the emotional feeling that comes with healthy food more than they enjoy how it tastes or feels to eat. 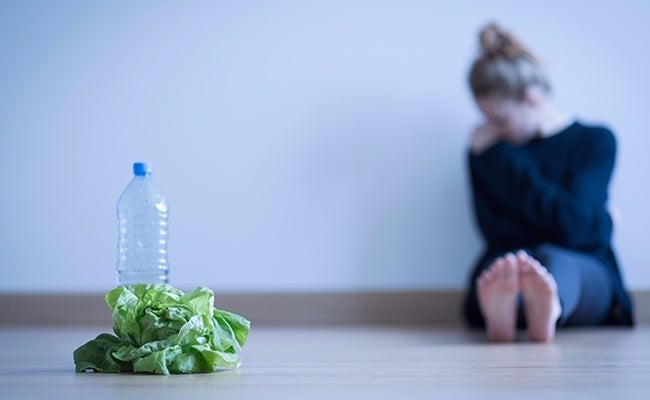 Signs That a Person Is Developing Orthorexia

The sooner the symptoms of an eating disorder are recognized and treated, the less likely it is that the disorder will damage a patient's mind and body. According to the National Eating Disorders Association, the warning signs can be categorized into emotional or behavioral symptoms and physical symptoms.

Emotionally and behaviorally, people with orthorexia tend to be extremely controlling when it comes to what the eat. They aren't just strict about their diet; they're avid planners and calculators who spend hours a day considering what foods they should put in their bodies. To some extent, orthorexia mimics obsessive compulsive disorder in that people with the disorder simply cannot give up their control.

Physically, orthorexia patients may appear malnourished. They tend to avoid any sort of fatty or caloric foods, which can give them a too-thin look. They are so fixated on what healthy foods they should be eating that they restrict their intake dangerously and label too many items as "harmful."

How to Get Help

Although eating disorders like orthorexia can be terrifying and uncontrollable, fortunately, they are treatable if you seek help from professionals. As soon as you begin to recognize the warning signs in yourself or in others, book a screening with a medical expert to determine what steps need to be taken to ensure safety. The sooner you ask for help, the sooner you can follow the road to recovery and actually start living a healthy life.

Call 800-931-2237 to reach the volunteer helpline at the National Eating Disorder Association. You can also text "NEDA" to 741741 in the event of an emergency. Your health is no joke, so no matter how concerned you are about your appearance or weight, take the necessary precautions to protect your future.

Related:
Stress and Emotional Eating: How To Stop
The Fittest Woman on Earth Has a Surprisingly Simple Diet
Clean Eating 101: Change Your Body the Healthy Way
Heidi Powell Shares Her Own Before Photo With a Brave Message for You

Fast Food Chains Found to Have Dangerous Chemicals in Wrappers