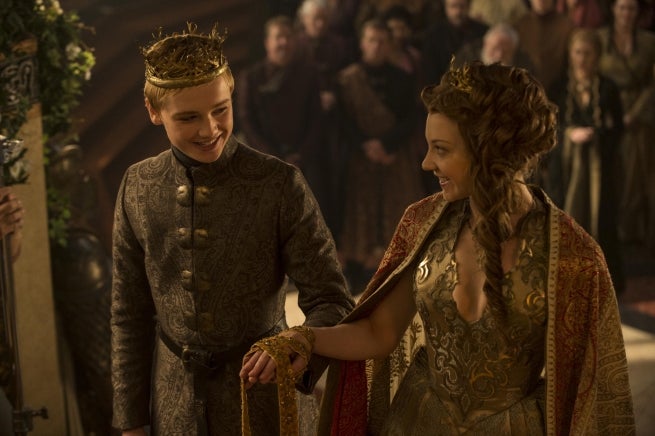 Arya is sweeping in the House of Black and White. "Jaqen H'Ghar" gives a man water to drink. The man drinks, then walks to one of the many statues in the chamber and prostrates himself in front of it. Arya approaches Jaqen and tells him that she's been sweeping for days, and that she didn't come to sweep floors. She came because he said she could be his apprentice to become a Faceless Man. He tells her all men must serve, Faceless Men most of all. He says Arya wants to serve herself, but that she must become no one and serve the Many-Faced God. Arya asks which one of the statues is the Many-Faced God. Jaqen says there is only one god, and all men know his gift. The man who drank earlier lies dead and two others come to take him away. Arya asks another girl where they are taking the man, but she doesn't get an answer.

In King's Landing, the royal family is escorted through the street towards the royal wedding and Cersei hears the crowds cheering and calling for Margaery. Margaery and Tommen are wed, and that night they consummate the marriage. Tommen is eager to give it another go, but Margaery says they should rest and asks to learn more about Tommen. They laugh at how strange it is to think of themselves as King and Queen and how Tommen only got here because Joffrey died, and yet he doesn't feel guilty. Margaery begins probing about Cersei and putting ideas into Tommen's head about Cersei smothering him with her overprotective nature.

Margaery shares her experience with the king with her handmaidens. Cersei finds her there. They trade pleasantries and Cersei turns to leave until Margaery inquires about what Cersei's new formal title is. Margaery hints that she and Tommen will soon have a child of their own.

Bolton men are at work repairing Winterfell as Reek walks through the yard. He stops in front of several freshly flayed bodies. Ramsay brought them back after a lord loyal to House Stark refused to pay his taxes. Ramsay is eating with his father. Roose tells Ramsay they don't' have enough men to hold the North against a unified revolt, and he can't depend on the Lannisters now that Tywin is dead. He tells Ramsay that the best way to forge an alliance is through marriage, not fear. He tells Ramsay that, now that he's a Bolton, its time he married, and that Roose has already found the perfect girl to solidify their hold on the North.

Littlefinger and Sansa look out from a hillside over Moat Cailen. Petyr says he's bringing Sansa home, and Sansa realizes that the marriage proposal Littlefinger received word of was for her. Littlefinger tells her she's to be wed to Ramsay Bolton, and Sansa isn't happy about it. Petyr assures her that this is what is best for her, her chance to stop being a bystander in her own story. He tells her that this is her chance to avenge her family, that there is no justice unless they make it. They ride on, and Brienne and Pod watch as they go. Pod worries they'll lose sight of their quarry, but Brienne says she knows where they're going.

Brienne asks about Pod's history as a squire. Pod said he squires for a knight who stole a ham. The knight was hanged, but Tywin Lannister pardoned Pod and sent him to squire for Tyrion. Pod says he's proud to squire for Brienne. Brienne offers to train Pod as a knight. Pod asks about Brienne's history with Renly. She tells a story of a ball her father held to try to find a match for Brienne. She talks about how all the men fawned and fought over her and she was happy, until she realized it was all a cruel joke. They mockingly called her "Brienne the Beauty." She tried to run, but Renly took her in his arms and told her not to show the other boys her tears.  They danced. She stayed loyal to him thereafter. She still plans to avenge Renly's death by killing Stannis Baratheon.

Stannis greats Jon as Lord-Commander and asks to speak alone. Stannis asks if Jon has considered the offer Stannis made to him. Jon is thankful, but he has to refuse and stay with the Night's Watch. Stannis says he'll march on Winterfell within a fortnight and that he leaves the fate of the Wildlings to Snow. Stannis leaves, but Davos remains. Davos tells Snow that Stannis believes in him, despite his demeanor. Davos reminds Snow that part of his oath is to guard the realms of men, and the best way to do that may not mean staying at the Wall.

In the House of Black and White, Arya is resting on her bed twirling her coin until another girl comes in. The girl asks who Arya is. Arya says no one and the girl hits her with a stick. She asks again and the girl continues to strike her until Jaqen enters. Jaqen sees all of Arya's belongings, including her sword, and questions them. Later, Arya ties them up with a rock and throws them into the ocean. She take Needle and cries with it in her hands. Instead of throwing it in the ocean, she finds a place to hide it in the stone nearby.

Arya returns to the House of Black and White and sweeps. She sees men carry a body away and they leave the door open. Jaqen finds her and brings her through with him. They go down stairs and Jaqen leaves Arya with the girl who hit her and a dead body. Together, Arya and the girl undress the body and begin to wash it. Arya asks what they do after that, but the girl does not answer.

Petyr and Sansa arrive at Winterfell and are welcomed by Roose Bolton, who introduces her to Ramsay. Sansa is brought to her quarters by an older woman. The woman welcomes her home, and says "The North remembers."

At the wall, Jon asks where Maester Aemon is, but Sam says he's been sick. Jon goes about assigning a brother to dig a new latrine pit. He then names Alliser Thorne as First Ranger. He assigns Janos Slynt to rebuild Grey Guard. Janos refuses, but Jon reminds him that it was an order, not an offer. Janos continues to refuse, now more loudly. Jon asks him one more time if he's refusing, and Janos tells him to stick it up his bastard ass. Jon orders Janos taken outside and orders Olly, now his steward, to bring Longclaw. The men come to take Janos and Thorne, to Janos' dismay, steps aside without struggle. The Night's Watch drags Slynt outside and places his head on a stump of wood. Stannis watches. Jon pulls out Longclaw and tells Janos to speak his last words. Janos apologizes for everything and begs for mercy. Jon hesitates at first, but finally chops off Janos' head.

The High Septon is in Littlefinger's brothel, surrounded by seven naked prostitutes dressed as the Seven. Lancel and other Sparrows burst in. They drag him into the streets naked and strike him with sticks as he marches forward. They chant sinner at him.

The High Septon meets with the Small Council to ask for retribution for the assault. Qyburn asks about the assault beginning in the brothel, and he claims to have been ministering to the lowest among them. Pycelle defends the Septon. The Septon wants the High Sparrow taken care of, and Cersei agrees to go meet with him.

She finds the High Sparrow with a grouping of other Sparrows in one of King's Landing's less appetizing corners. The High Sparrow asks if the gods sent Cersei here to tempt him, or if she's here to arrest him for assaulting the High Septon. He calls the Septon a boil and a hypocrite. She says the Septon wants the Sparrow executed, but tells the Sparrow that the Septon in now in the Red Keep dungeons.

In his lab, Qyburn takes a rat and kills it with a knife. Cersei enters with a message she wants sent to Littlefinger. She asks about Qyburn's work, and he says he's made more progress than expected. A large body beneath a sheet stirs behind Qyburn.

Sansa walks through the Winterfell yard, past Reek. Petyr talks to Ramsay about Sansa, and Ramsay says he's fond of her and will never hurt her. Petyr is surprised he's heard so little about Ramsay, and Ramsay tells him he was only recently given his father's name. Roose finds them and sends Ramsay away. They discuss their deal and the weakness of the Lannister family. Roose delivers Cersei's message to Petyr, and Littlefinger notes that the seal is broken. With Tywin dead, Roose questions who will back him. Littlefinger reminds Roose that the last time the Eyrie and Winterfell allied, they took down the Targaryens.

Tyrion gores stir crazy in his and Varys' wheelhouse as they approach Volantis. Tyrion finally goes out into the city, and notes the slaves with tattoos on their faces to denote their job. They find a Red Priest as she is preaching to a crowd. She preaches that Dany is the Dragon Queen who will save them all. The priest stares right at Tyrion and he covers himself up and goes looking for a brothel. The bouncer outside rubs Tyrion's head for luck. He isn't amused. Tyrion and Varys enjoy a drink and notice a prostitute dressed up as Dany. Jorah Mormont is in the brothel, crying into his drink. Tyrion starts hitting on a prostitute. Tyrion glances at the woman dressed like Dany, and the prostitute he was talking to says everyone likes her. Tyrion flirts until the prostitute agrees to have him, but he finds himself not ready and walks away. Tyrion goes outside to urinate and Varys realizes he's lost sight of him and moves. Jorah finds Tyrion outside and binds and gags him, and says he's taking Tyrion to the queen.