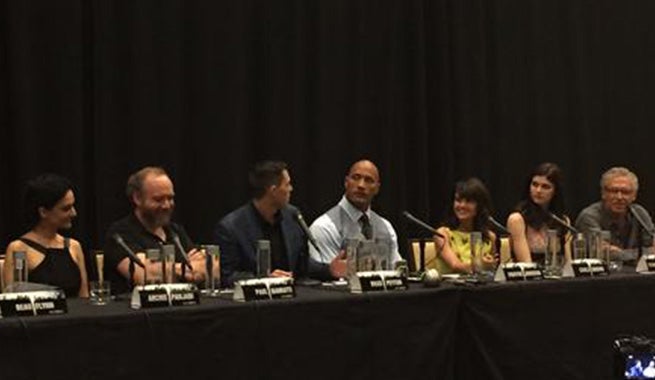 For the most part, every question came back to the topic of how this film portrays what would happen in a real world disaster and how the cast and crew themselves would handle such an event in their real lives. Johnson offered up the responses for most questions, including the first which asked about if the recent earthquake in Nepal has made them think any differently about the film. “We made the movie knowing and understanding the world we live in,” Johnson explained. He went on to say that San Andreas isn’t so much about the disaster itself, but more about the “ideology of family coming together through a tragedy.”

Peyton chimed in to say, “The movie is meant to entertain you,” reminding us that it is “Not a documentary.” He, too, says “the movie is not about earthquakes,” but rather, “a family trying to get back together.”

The cast is no stranger to tragedy themselves. Johnson described his experiences in Miami when hurricanes would plow through, none of which sounded delightful. Carla Gugino, Alexandra Daddario, and Paul Giamatti jointly described a particular national tragedy that they all happened to be in the New York area for - September 11. Daddario said she was amazed by “how people came together,” and “what people were able to do for each other.” Gugino agreed, saying “There is something in the moments of crisis that is amazing about humanity,” concluding that, “You find your best self.”

Peyton joined in, agreeing that the disastrous moments of terror the cast members had described is when “you see the extremities of human nature.” In the case of San Andreas, the heroic side of that extremity will be on display.

Of course, one has to wonder whether or not something such as the massive earthquake from San Andreas is possible - it is. Johnson, Peyton and writer Carlton Cuse described the process of getting San Andreas into production. They didn’t just research the possibilities themselves - instead they took their story to “the best scientists,” to challenge it, according to Johnson. The end result? The scientists, “Walked away saying this could happen.”

Every TV Show, Movie, and Original Coming to Netflix This Week (August 2)

Gene Hackman Is Trending Today and It's for the Best Reasons