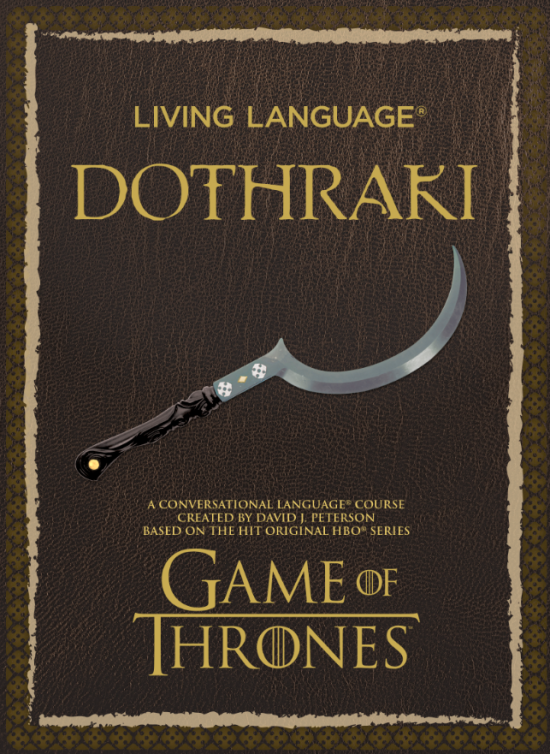 HBO is inviting fans to dive into the Dothraki culture from Game of Thrones by announcing Living Language Dothraki: A Conversational Language Course Based on the Hit Original HBO Series Game of Thrones.

Fans have been piecing together the Dothraki language on their own for some time, using whatever they can get from Game of Thrones to piece together the language’s dialogue, vocabulary and grammar. Fans have even posted their own instructional YouTube videos and the “Tongues of Ice and Fire” Wiki boasts 150 self-identified Dothraki speakers.

For the first time, there will now be an official guide to the Dothraki language, put together by acclaimed language and culture consultant David J. Petersen. Living Languages Dothraki includes more than 500 words and phrases, including never-before-heard material and words coined exclusively for the course. Living Languages Dothraki will give fans their best opportunity to learn the language of Daenerys’ people.

Like any other language course, users will learn vocabulary, grammar, pronunciation and cultural notes, which explain context as well as dos and don'ts. For example, since horses are so central to Dothraki culture, many phrases have their roots in the equestrian. Whatever you do, never call a Dothraki warrior anifak (walker): it is the ultimate insult since it implies he can no longer ride his horse.

Petersen narrates the course himself, giving fans an opportunity to learn about the language from the source.

"I'm thrilled to be working with Living Language to produce the first official Dothraki text," says Peterson. "This book will take you from arakh to zhavvorsa in no time, and the audio samples will help you perfect your pronunciation. I often get the question, 'When will there be a Dothraki guide I can buy?' The answer is now, thanks to Living Language. Me nem nesa!"

Living Language Dothraki is the first time that Living Language has put together a course for a created language. The course will be available in three editions:

is available for pre-order now and will be released on October 7.