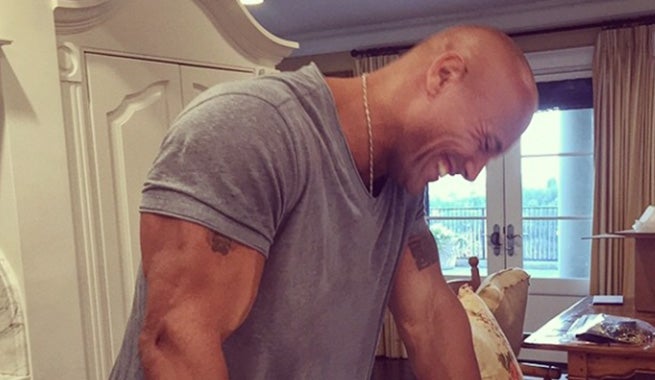 Earlier this week, Dwayne “The Rock” Johnson posted a photo to Instagram in which he looks particularly happy about something. Johnson, leaned over his kitchen counter, is reading a letter from one of his childhood idols, Steven Spielberg.

Grinnin' now like a big ass kid... When I was 8yrs old I sat front row to see a sold out INDIANA JONES in its opening weekend in Charlotte, North Carolina. I walked out of that theater excited and wanted to be "Indy".. cool, funny, charming with the ladies and kickin' ass w/ a smile. But at 8yrs old I was also perfectly content playing w/ my Star Wars figures and sneaking off listening to Richard Pryor concerts. Throughout the years I've credited this man and his movies as being my greatest inspiration in becoming an actor and wanting to always make "his kind" of movies - entertaining, quality and above all else.. heart. Just receiving this personal letter from him and its not only made me incredibly humbled and grateful, but it's also brought me back to being that 8yr old boy again who not only loves movies, but I now get to make the movies I love and enjoy the impact they have on others. THANK YOU STEVEN SPIELBERG for these inspiring and motivating words in your letter and cheers to making sure I'm always listening to that little voice in my gut. #CoolestGiftEver #BigAss8yrOldKid #SpielbergInspired

According to the photo’s caption, Spielberg sent Johnson the letter as a form of congratulations and encouragement. Johnson also described his admiration for Spielberg’s work and gratitude for being in the position which he is today. Earlier today, Johnson appeared at the San Andreas press conference in Los Angeles, California.

Members of the press tossed questions about first responders, disasters, and how the film manages to display humanity, but when the subject of Spielberg’s letter came up, Johnson quickly became very humbled. He joked at first, saying that he received a letter from “the director of Raiders of the Lost Ark,” but was not a “name dropper," but coughed “Steven Spielberg,” into the microphone.

When asked what exactly the letter entailed, Johnson looked to be genuinely speechless for a rare moment. San Andreas producer Beau Flynn chimed in to say that the letter was written “as a fan,” which humbled Johnson even more. Keeping most details close to the vest, Johnson said little more than he did on Instagram. Adding that a long time idol of his growing up, one who helped him escape reality and feel high on life after watching one of his films, sent a letter congratulating Johnson on how far he’s come.

Flynn also compared San Andreas director Brad Peyton to Steven Spielberg, saying that “He is the next Spielberg.” Johnson, Flynn, and Peyton all agreed that San Andreas has many elements of a Spielberg film and his work served as major inspiration when producing it.

Join us for the Second Printing of the latest big issues in the video above!

Dwayne "The Rock" Johnson Humbled By Letter From Spielberg