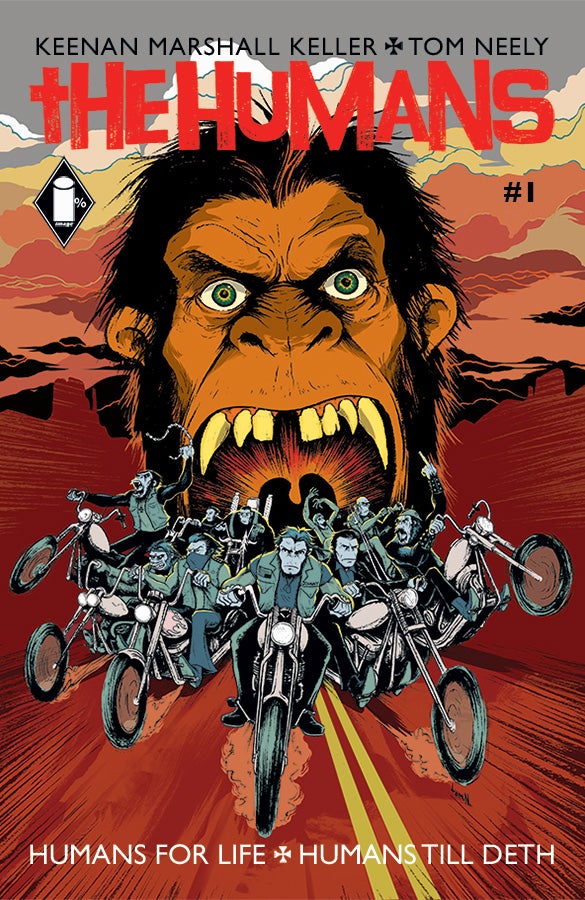 Biker culture has held a unique place within the American zeitgeist since the 1960's culminated in the deadly Altamont Free Concert featuring the Rolling Stones with murder provided courtesy of the Hells Angels. From Hunter S. Thompson's Hells Angels published in 1966 to the mass appeal of Sons of Anarchy (now in its seventh and final season), the biker gang has been stuck in the minds of Americans for almost half of a century. Their lawless nature and choice of transportation have created an ethos that centers on the concept of freedom. They live outside of the mainstream, possessing a subculture that functions as its own society. This romantic notion is balanced by a base ugliness. Violence, sex crimes, and drug addiction permeate the culture. That conflict between freedom and the human id unleashed is a potent combination for any story.

The premise of The Humans is standard, almost rote. It follows a single biker gang composed of a wide variety of personalities, all of them outsiders. They celebrate their own traditions, rumble with rival gangs, and engage in all sorts of debauchery. It is exactly how one might imagine a biker gang in the 1970's after reading and watching the aforementioned works above.

That setup is well told, but nothing new. The twist comes in the presentation of the story, as Neely takes advantage of the comics medium to do something truly unique. The Humans in this story are not humans; they are apes. Neely has altered the appearance of these characters to match with various species within the ape family like gorillas and orangutans. If you're thinking Planet of the Apes, then you're not far off. There's no reinvention of society according to the rules of apes though, everything they do is very human. The apes stand on their hind legs and speak English authentic to Bakersfield in 1970. Drug use, sex, and violence are all portrayed in a very human manner. The visual appearance of apes is not a tool of science fiction; it's a choice of presentation that makes a substantial difference in the reading experience.

Neely's cartooning takes all of the ugliness within the story and presents it in a considerably more palatable format. The barriers created by graphic depictions of violence and sex are lowered. What might be considered unseemly if portrayed in a realistic manner is altered with a sense of humor. The caricatures of apes are easy to respond to and provide levity to their story. There is nothing less dirty or dangerous about this story than something like Sons of Anarchy. However, the use of cartooning allows Keller and Neely to help readers empathize with the characters more easily than if they were seeing human beings engage in the same behavior. It's a simple trick, but a very effective one. By the end of The Humans #1, readers are much more likely to find themselves invested in this dangerous subculture.

The visual storytelling in this debut is effective in more than its cartooning and style. Neely has crafted a compulsive read that, like the bikers themselves, never lets go of the clutch. A sequence featuring a brawl between The Humans and a rival gang acts as a masterful centerpiece of the issue and shows off Neely's storytelling chops. He is a superb draftsman, distinguishing characters and geography easily. Kristina Collantes' colors help to set the two groups apart before the mayhem ensues. In a two-page spread, Neely embraces the chaos of the fight stringing several stories together through a panel layout that resembles a shattered pane of glass. The information is all there and clearly told, but it comes in brief bursts. He is more interested in the momentum and feeling of violence here, but never loses a sense of clarity. His use of onomatopoeia also adds an air of levity that again makes the violence much more palatable.

This sublimation of ugliness isn't accidental. Keller's script is aware of the problems that exist here, but is interested in bringing readers on board before fully exploring them. The story references Vietnam and brushes up against the gender issues at play, but focuses more on the brotherhood and companionship provided by the gang in order to make it seem less destructive. Yet the destructive nature is always resting just below the surface of The Humans actions and existence, constantly threatening to rise to the surface. How these issues are addressed as the series continues will likely prove to be a fascinating thesis for the comic. For now Keller is focused on striking a balance that allows readers to enjoy this story without condoning what is happening within the pages. It's a difficult trick, but one that Keller pulls off with seeming ease.

Neely's lettering should be noted as well. Despite the excellent work done by digital lettering firms, there will always be an appeal to hand lettering. Comics like The Humans and Michel Fiffe's COPRA feel more personal like there is a unique bond between their creators, readers, and the work itself. Every word balloon and text box has been crafted by Neely to speak directly to the readers and it helps add to the connection between this issue and its audience.

It's not just Neely's cartooning that is helping to kindly usher readers into the often vicious world of biker gangs, but the care and attention put into every aspect of the comic. When you are holding The Humans #1, you can feel the work and energy that rests within its pages.

The Humans #1 is an impressive debut. It asserts Neely's position as a talented cartoonist, one who is capable of seamlessly blending tones to great effect. This comic provides an intriguing introduction, one that lays a foundation upon which Keeler and Neely could construct one of the most interesting comics on shelves today.