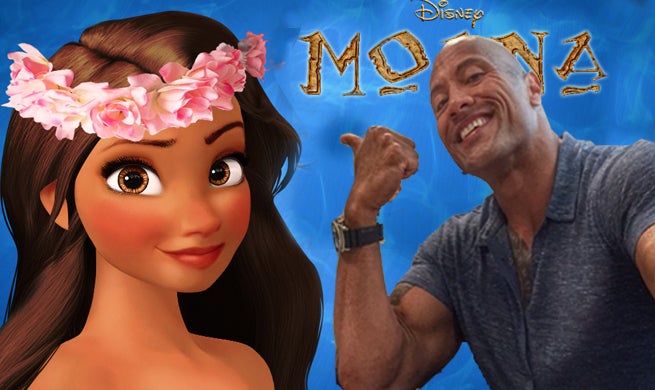 Dwayne "The Rock" Johnson has signed on for his newest endeavor. This time around, he's joining Moana, Disney's upcoming animated feature film about a young woman who sets sail for a fabled island, accompanied by the legendary demi-God Maui.

Here's the most fun part: we're going to hear Johnson sing. Johnson is no stranger to singing. He has sang during WWE events and on Live With Kelly & Michael this past holiday season and he's actually pretty talented. Coming up next week you can catch The Rock on Spike TV's premiere of it's new show, Lip Sync Battle, where he'll face off agaisnt Jimmy Fallon in what is sure to be an epic affair. Is there anything Dwayne Johnson can't do?

At DISNEY STUDIOS signing contracts to play the male lead in their next big classic animated musical, #MOANA. Just had an amazing 2hr presentation and it's easy to see why they're the greatest story tellers in the world. Im excited. And in the background my homies Fred & Wasabi from #BigHERO6 are jumpin' for joy joy cause they heard I'm gonna sing in the movie. #WeTrulyKnowWhereWereGoing #WhenWeUnderstandWhereWereFrom #NeverForgetHome #MOANA

Dwayne "The Rock" Johnson Signs On To Sing In Disney's Moana