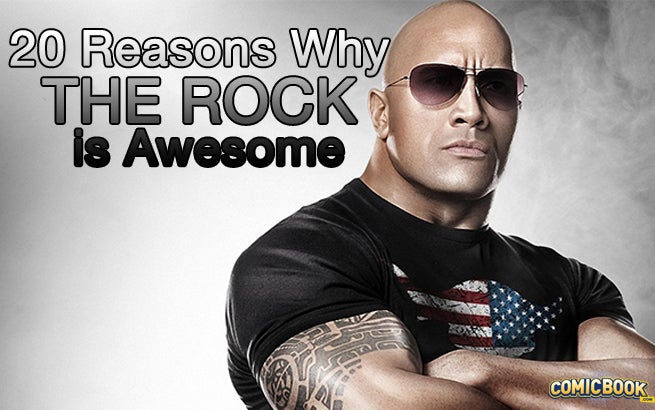 Disclaimer: I am a huge fan of The Rock and I have been for my entire life that I can remember. That being said, Dwayne Johnson has a lip sync battle coming up in April (not to mention, Furious 7 that month, too) with Tonight Show host Jimmy Fallon. For most celebrities, it would be kind of weird if they were being silly dancing around to Taylor Swift, but when The Rock does, millions (AND MILLIONS!) of us will tune in for all of the awesome.

In the mean time, here is a list of (only) 20 other reasons why The Rock is awesome.

1. He can be called The Rock and it's not weird.

Picture this: You go up to your friends and say, "Call me The Rock from now on." Granted, they're going to think of Dwayne Johnson, but if The real Rock never existed, they would still laugh in your face. I mean, a rock. Picture it. This guy is called "The Rock," and it is still so cool. Yeah, he might be solid as one and could probably break boulders, but more importantly, he is called "The Rock," and no one has ever thought twice about it. Either because he's awesome, or because...

2. He is the most electrifying man in all of sports entertainment.

Every time The Rock is in the ring or on the screen, he brings it. He's the trailblazin', eyebrow raisin', jabroni beatin', pie eatin', show stoppin', elbow droppin', people's champ who has been the WWE champ seven times over. His wrestling skills, sarcasm, and acting abilities make him electrifying and awesome.

As a mama's boy myself, I applaud anyone who takes care of their mother when they can. We all remember when the Rock tweeted out the image of the Cadillac he bought for his mother. The guy knows who has been there for him throughout his grind and now that he has reached a point where he can pay it back, he does so. Whether it's buying his mom a car, asking for prayers after an accident, or playing Santa for his nephew- he does it.

Like I mentioned before, The Rock is a 7 time WWE champion. He's tangled in the ring with the best of them, from Hulk Hogan to Stone Cold Steve Austin. He's headlined Wrestlemania a number of times and even returned to WWE in Royal Rumble this year.

Since making his movie debut in The Scorpion King back in 2002, Dwayne Johnson has headlined several films. Recently, he has played a part in reviving the Fast & Furious franchise by playing Agent Hobbs, a kick-ass international cop who chases down and then teams up with Vin Diesel's character, Dominic Torreto. Let's not forget how he displayed his acting chops in Pain & Gain when he played the enormous, crazy, Bible-thumping kidnapper, Paul, where he graced us with this line- "Jesus Christ has blessed me with many gifts! One of them is the ability to knock someone the #$%! out!"

6. It doesn't matter what you think.

So what if it was one of his famous lines in WWE? It's basically his alma mater. He isn't afraid to have fun and he doesn't care who is watching. If you missed it, on Christmas, Dwayne went on Live with Kelly & Michael decked out in a holiday onesie and performed "Here Comes Santa Claus." A lot of us probably wouldn't do this in front of our own families, let alone have the stones (or rocks) to perform it on national television. If we're being honest, it was actually a pretty good performance, too.

7. He can dress like this and it's completely fine.

The Rock tweeted that picture of him rocking a fanny pack and turtle neck a few months ago and had significantly more of an impact on the internet than Kim Kardashian ever did. Look at it, there's even a towel under his elbow to keep the turtleneck sweater clean. Not only is it okay, but the picture was immortalized in awesome fashion when Jimmy Fallon gave The Rock and action figure of his 90s self.

8. He is joining the super hero world.

After teasing it to us for a while tweet after tweet, Dwayne finally confirmed he's joining the super hero movie genre. He's joining the DC Cinematic Universe by playing Black Adam in Shazam. His film resume is already a ton of fun, but now that we might see him compete with Justice Leaguers- awesome.

9. He is always working.

The guy doesn't take a break. It's inspiring how hard he works, and he always lets us know. We've all watched him yell, "Focus!" in the gym on Instagram or seen pictures of his 4 AM alarms, but aside from working out, he loves what he does in film. He's constantly taking on new projects, currently HBO's Ballers, in between Fast & Furious installments, having just released Hercules this past summer, and hosting his own television series, Wake Up Call. Balancing all of this work can not be easy.

I, like many others, have been lucky enough to meet The Rock, at least in passing. I attended the premiere of Hercules in Hollywood, last summer, prior to being any sort of member of the press, solely as a fan, and was as excited as you could imagine when he came across the street to greet fans and take pictures with as many as possible.

I snagged mine while he was talking to the lady behind me, but that's not the point. How many times do you see other celebrities of his caliber tweeting or Instagram-ing pictures and videos with fans? Imagine what that does for the people pictured? Getting to go to their friends and say The Rock Instagrammed them? It could make somebody's year. The Rock knows that and is awesome for appreciating those who appreciate him. In the words of a recent tweet and Facebook status of his- "It's nice to be important, but it's more important to be nice."

Not only can The Rock play an action-hero, but he can take on comedic roles, too (sometimes unintentionally, like The Tooth Fairy which we'll always laugh at). Throw him into The Other Guys for a few minutes and it's hysterical. It's not just movies, though. In WWE he was one of the most quick, witted, and sarcastic personalities ever on television. Combine all of this with his Instagram videos where he talks about how tall Kevin Hart is or to his ironically small dog that hits the gym with him, and the guy is pretty funny.

12. He trained the Wolverine.

We know that Dwayne and Hugh Jackman are good friends from social media and interviews. We also know that the Wolverine himself went to The Rock for workout advice in order to properly become the physical beast we've seen on screen in The Wolverine and X-Men: Days of Future Past. Obviously, it worked, because Hugh is, "shredded like a Julienne salad, man."

13. He helps and encourages people.

To call The Rock is a role model would be an understatement. I already touched on how he gives back to his family, but if you've watched any of either of the shows he has hosted (The Hero and Wake Up Call), you know that he uses his influence and abilities to help people. Not only does he respond to fans on Twitter during #RockTalk, but he will more than occasionally respond to tweets with encouraging messages.

He even responded to me about a TV show I still hope to make a reality which sparked a ton of interest and help with my project (I have since changed Twitter handles, which is why they don't match). For this, Rock, I'm very thankful.

Watch out, he might just make your picture epic.

15. He has a contagious smile.

I've watched The Rock on Jimmy Fallon at least twice that I can remember. Not that I don't laugh or smile during The Tonight Show, I'm already a huge fan of the program, but when Dwayne sits down with Jimmy, you can tell how happy he is to be there. This is the case in most interviews he does. I can't say I know him personally, but his smile and personality seems so genuinely that it's contagious.

This ties into the previous point, but there has never been a time I've watched The Rock on a talk show and not been entertained. He is shameless, energetic, and fun every time. While promoting Hercules, Dwayne was presented with the fanny pack action figure you saw earlier by Jimmy Fallon, but a few months later when The Rock went back on the show, he gave Jimmy his own, hysterical action figure, the Exhausted Dad. The guy's sense of humor makes him an awesome talk show guest.

Yeah, Lou Ferigno did it first, but that doesn't make The Rock and less Hulk-ier. He dressed up for Halloween but, honestly, probably scared a couple kids. Watch out, Mark Ruffalo, Marvel might try and save some effects money and thrown Dwayne at Thanos.

18. He Instagram's his food and it's actually worth seeing.

How many times do you see your friends or other people you follow Instagram their everyday meal from Longhorn Steakhouse or Applebee's? Do you ever really care? No. But when The Rock Instagram's his food, it is a BIG deal (literally)! His cheat days are epic. Mountains of brownies, piles of pancakes, entire pizzerias... His meals are awesome.

John Cena has tried to fill The Rock's void in WWE and has, at times, been arguably successful. But still, whenever The Rock comes back I get goosebumps, maybe because it's a throwback to my childhood. He may not have beaten John Cena at Wrestlemania, but he layeth the smacketh down on him and hit the Rock Bottom before tearing a muscle in his back and having an awesome response to surgery.

Dwayne Johnson is always up to something new and somehow, unlike most celebrities, it almost always pleases all of his fans. When do you hear criticism about this guy? Whether it be his wrestling, acting, or the life he puts on social media, everyone loves the wise-cracking, gentle giant. He's awesome.

Let's not forget he took a break during filming of Hercules and played pattycake with a little girl..

Do you smell what The Rock is cookin'?

P.S. Rock, if you read this, my mom's birthday is April 2. Wish her a happy birthday?

20 Reasons Why Dwayne "The Rock" Johnson is Awesome