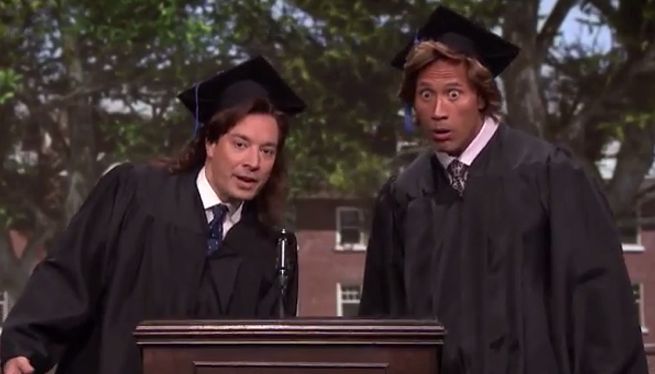 During his appearance, The Rock teamed up with host Jimmy Fallon in a sketch about two high school students with the lowest GPA's in their class. Fallon played Bobby Ristick, and The Rock played Logan Duffy. Bobby and Logan were chosen to deliver their high school commencement speech in 1989.

Logan offered such words of wisdom as, "Focus on the future. Don't get caught up in fads the won't last like computers. You really think a dumb box of wires is going to be around in ten years." Watch the full sketch below.

San Andreas is scheduled to be released in movie theaters on May 29, 2015.

Dwayne Johnson Teams Up With Jimmy Fallon For 1989 Commencement Speech

'Manifest': Stephen King Joins Masses Calling for the Show to Be Saved