What's the best way to take a trip down memory lane? Sure there's always looking back at old photos and wondering what the heck you were thinking then you put on that outfit. Or you can search around the internet for a way to stream your favorite shows and hope that they still hold up. But one of the best ways to look back is to think about some of the ridiculous things you used to eat as a kid.

Everything from sugary drinks that make Mountain Dew look healthy, to round cheese flavored chips, to cookie flavored cereal, those were the days! There really wasn’t' anything healthy about most of the stuff kids used to eat - especially the strange colored ketchup.

Here is a list of 12 foods you can't get anymore - for better or worse - that will bring you back.

Sadly, this delicious cereal was removed from shelves in 2007. So we've had to eat Oreos for breakfast the old fashioned way - shoving our face with cookies. 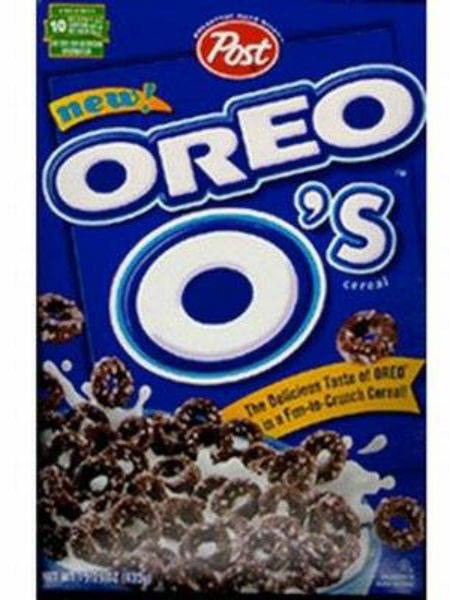 Of course, if cookies for breakfast weren’t your thing, then there was always Nesquik cereal. This chocolate flavored cereal was exactly what the chocolate milk fan wanted. Not only were the cereal bits flavored, but despite how much white milk you poured into the bowl, all that was left in the end was delicious, drinkable, chocolate milk.

It was almost overkill to add a big glass of Nesquik to the meal to wash it all down.

What would a walk down memory lane be without everyone's favorite squeezable juice drink?

Even today, you're sure to recall the memories of twisting off the tops of the Squeezit container, almost spilling some - every single time - then sucking out what little bit remained in the top before drinking from the actual bottle. Squeezits were just one kind of juice drink out at the time, but it was the only one that came with a creepy face on the bottle.

These "juice drinks" were mostly made of sugar, but were still kid's favorites until they were taken off the shelves in 2001.

For those who like a more "adult" feeling juice beverage back in the day, there was always a Snapple Elements on hand. These element themed drinks came in classy glass bottles that were way more sophisticated than a plastic squeeze bottle. They were also made by Snapple, which was something the adults always drank.

Sadly, these drinks disappeared off shelves a while ago, but they still have a Facebook page. Which did you prefer, Earth, Rain, Sun, Fire, or Velocity?

Speaking of glass bottles, remember those drinks that used to look like lava lamps? Those were Orbitz Drinks, a soda like drink that just happened to have little colorful objects floating around.

There's no wonder why those aren't around anymore. Did the floating orbs even have a flavor?

Remember the days when you could pour powdered bubble gum into your mouth, then suddenly have a huge piece of gum? That was the beauty of the Hubba Bubba Bubble Jug. That tropical fruit flavor wouldn't last long, but that was okay. To get more, all you had to do was pour in some more powder.

Sadly, kids today won't get to experience this unique candy. It's left the shelves.

The original and iconic Chees Balls were created by Planters and came in a canister, which made it easier to sneak when you needed a snack that a loud Cheetos bag. Though, either way you'd end up with a lot of orange cheese dust on your fingers, hands, and probably your clothes.

The cheese flavored corn puffs were highly addictive and hilarious for a good joke. Occasionally you can find a knock-off brand somewhere, but the original Chees Balls have been gone from our lives since 2006.

Back in the day everyone loved Doritos. It didn't matter if they were shaped like the original tortilla chip, or twisted into shapes, they were an essential item for any lunch bag. But what became really popular for a while was 3D Doritos.

Not only did this fun, puffy, triangle shaped, bite-sized chip come in regular bags, but they also came in handy containers with built in lid-bowls. They were the perfect on-the-go snack for those days riding bikes around the neighborhood or playing sports in the park.

However, in 2005, Doritos committed to staying flat, eliminating the 3D Dorito.

One of the strangest things to come out of the world of snacks was colored ketchup. For a while you were able to dip your french fries into pools of purple and green tomato-y goodness. Supposedly every color tasted the same - like regular ketchup - but for some, it was hard to commit to topping your fries in a purple goop.

While Altoids remain as a go-to breath mint, at one point they were also a go-to candy. The Sour Altoids were a great little treat that you could carry in your pocket and suck on when you needed something sweet. The only problem was that they were sometimes a little too "curiously strong."

These sour little candies were taken off the market in 2008.

While Europe had the Kinder Egg, America had the Wonder Ball.

This hollow chocolate ball was usually filled with small surprise candies that may, or may not, have been a choking hazard. Most of the time these treats were themed to kid's favorite movies and television shows.

Sadly these treats were taken off the market, but have been known to make a quick comeback for a popular kid's movie once in a while.

What do you get when you take a sporks themed Kangaroo, turn him into a cookie, and package him with delicious vanilla frosting dip? Dunkaroos!

These awesome snacks were addictive and essential to any proper afternoon snack. Sadly, they are no longer sold in the US, but you can still find them in Canada. What's more, you can find plenty of Dunkaroo dip recipes on Pintrest if you'd rather make your own.

Of course, what would a snack throwback be without the delectable Planters Peanut Butter Crisps?

These snackable treats were just what you needed at the end of a hard day. The crispy cookie outside with a variety of flavors inside was exactly the right snack, no matter who you were. The flavors included peanut butter - of course - as well as, chocolate and strawberry.

12 Discontinued Foods That Are Pure Nostalgia

Paige Spiranac Weighs in on Tiger Woods' Sex Scandal, Says He's Not a 'Monster' for Cheating

Facebook Oversight Board Will Decide If Trump Is Banned Forever