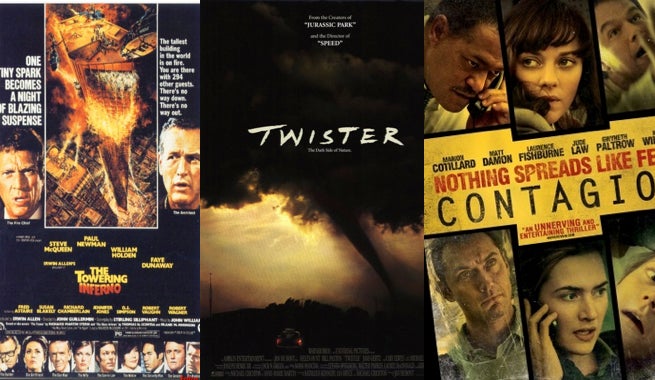 Disaster movies featuring a small group of survivors enduring an unstoppable natural force have enthralled moviegoers since the 1970s. San Andreas, the new movie featuring Dwayne "The Rock" Johnson fighting an earthquake armed only with a helicopter and his bare hands, is the latest entry to this proud genre of Hollywood films.

In honor of San Andreas' release, here are five of our favorite disaster movies of all time. 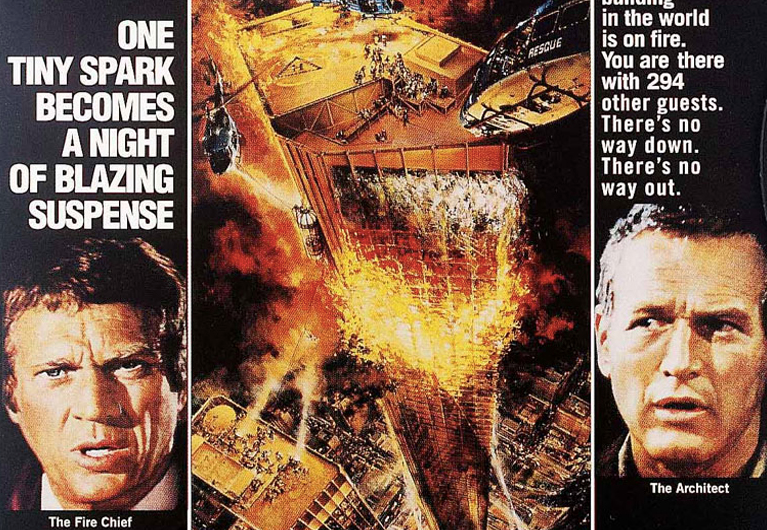 While not the first modern disaster movie (that title belongs to either Airport or The Poseidon Adventure, depending on your definition of "disaster"), The Towering Inferno was one of the greatest disaster movies to hit theatres in the 1970s. The Towering Inferno is about the world's tallest building catching on fire due to faulty electrical work. The fire quickly spreads throughout the building as firefighters employ increasing desperate means of rescuing the people inside.

Featuring an all-star cast including Steve McQueen, Paul Newman, William Holden, Faye Dunaway, Fred Astaire and Susan Blakely, The Towering Inferno was a critical and financial hit. Nominated for 8 Academy Awards, the movie won three Oscars and earned over $139 million dollars at the Box Office, making it the highest grossing film in 1974. 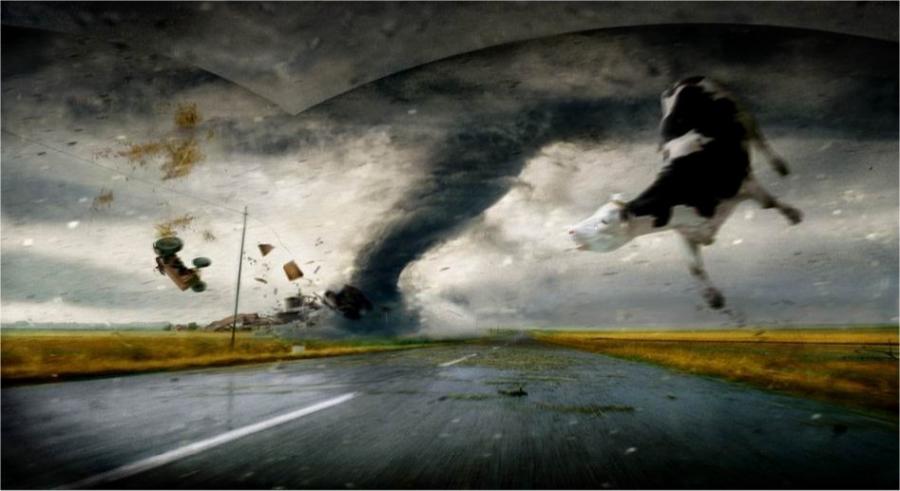 Twister was one of three movies to "revive" the disaster movie genre in 1996, along with Independence Day (more on that later) and Daylight. Twister focused on the turbulent world of tornado chasers Jo Thornton and Bill Harding, played by Helen Hunt and Bill Paxton. As Thorton and Harding attempted to reconcile their strained marriage, the pair raced a rival researcher from storm to storm, hoping to deploy a new research device to collect valuable information. Twister is filled with instantly memorable scenes and had a surprisingly low death count. The movie was a smash hit in box offices, earning over $494 million in box offices, second only to Independence Day that year.

Hailed as "the mother of all disaster movies" by critic Robert Ebert, 2012 showcases natural disaster on a global scale. After a solar flare causes the Earth's core to superheat, John Cusack (playing a science fiction writer turned chauffeur for a rich Russian billionaire) tries to save his family from the rapid destruction of the entire Earth's surface. Volcanoes, earthquakes, mega-tsunamis, Danny Glover as president, 2012 has every natural disaster imaginable, all in glorious CGI heavy sequences. 2012 might not be the best disaster movie ever made, but it's definitely one of the most ambitious. 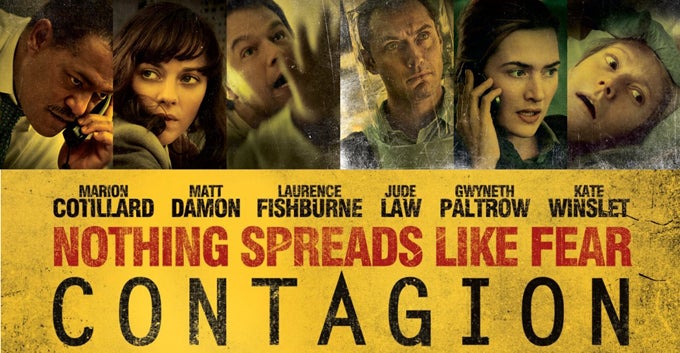 While most disaster movies focus on natural disasters such as storms or volcanos, Contagion is about how the United States and the rest of the world deals with the rapid spread of a deadly and unknown disease. Starring an ensemble cast of Matt Damon, Marion Cotillard, Laurence Fishburne, Jude Law and Kate Winslet, Contagion had a unique narrative style that explored multiple largely independent storylines. While it lacks the big, breathtaking action sequences featured in most disaster films, Contagion is a captivating and smart movie worth watching. 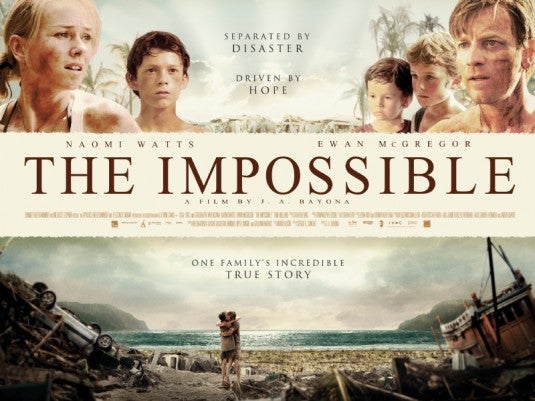 Unlike the rest of the movies on this list which deal with fictional natural disasters, The Impossible is based on the events of the 2004 tsunami that destroyed parts of Indonesia, Sri Lanka, India and other Asian countries. The Impossible explores the tsunami's devastation from the perspective of a tourist family vacationing in Thailand played by Ewan Macgregor and Naomi Watts. The Impossible earned rave reviews during its release and Watts was nominated for an Academy Award for her performance in the film. 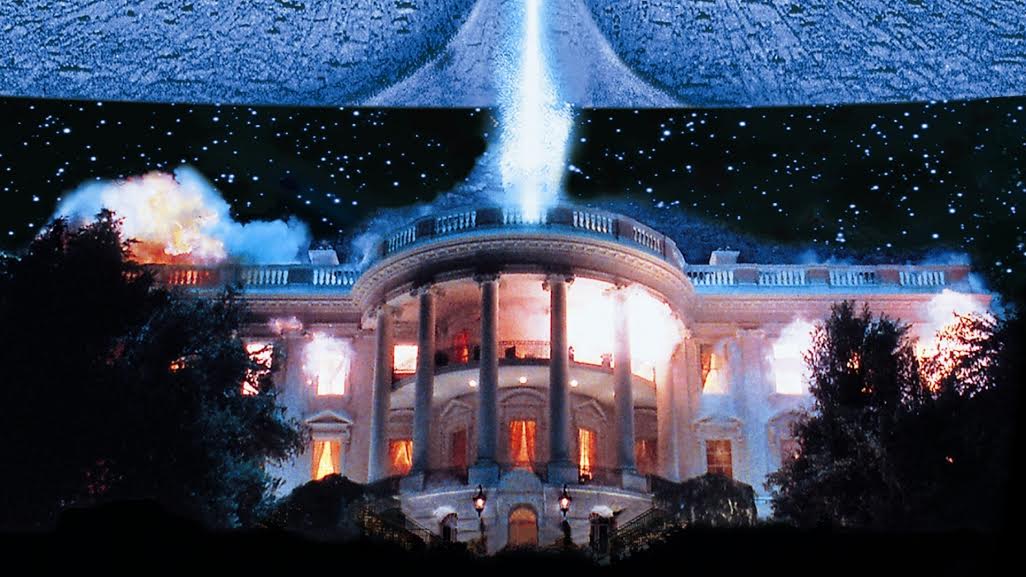 While it's debatable whether it's a "true" disaster film or a sci-fi film with a disaster angle, I still consider Independence Day to be one of the best disaster movies ever. Independence Day has it all: the destruction of countless landmarks, Will Smith in the prime of his acting career and a memorable Bill Pullman speech that makes you want to fight aliens whenever you hear it.

What are your favorite disaster films? Leave your thoughts in the comments below.

The Five Best Disaster Movies Ever