Hacksaw Ridge tells the story of Private Desmond T. Doss (Andrew Garfield), a young man from Lynchburg, Virginia, who enlisted in WWII as a combat medic who also happened to be a pacifist. As a conscientious objector, Desmond was not required to bear arms as part of his service - a factor his boot camp leaders Sergeant Howell (Vince Vaughn) and Captain Glover (Sam Worthington) find unacceptable.

The military leadership makes camp such hell for Desmond that his fellow soldiers in the division even turn on him. Facing dishonorable discharge, prison, or worse, Desmond nonetheless stands his moral ground as a matter of faith. When his unit is deployed to The Pacific to fight in the Battle of Okinawa on Hacksaw Ridge, Desmond faces the hell on Earth that is warfare, with nothing but his training and faith to shield him. 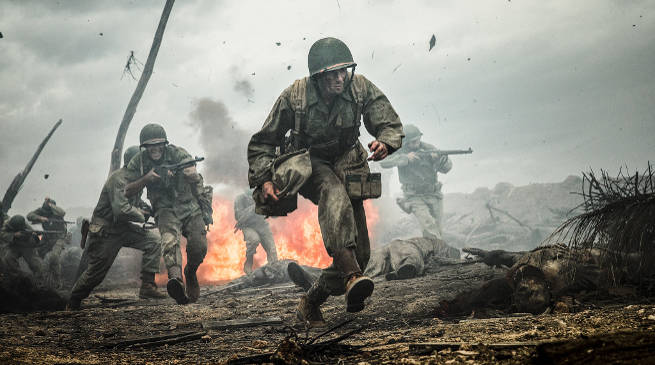 Directed by Mel Gibson, Hacksaw Ridge combines the filmmaker's Oscar-winning talent for epic war drama (Braveheart) with his deep religious faith (Passion of the Christ) and general reverence for legendary figures. The combination results in a heart-swelling and grimly bloody love-letter to the American spirit - albeit an idealized -- if somewhat outdated -- version of America.

Robert Schenkkan (The Pacific) and Andrew Knight's (The Water Diviner) screenplay is boiler plate WWII biopic format, with an efficiently based flashback setup to the training camp character development, and a brief stop at some courtroom drama before the main event: the big third act Battle of Okinawa sequence. There is a clear character portrait and thematic arc, and it's all so basic to the point of arguably being a bit stale.

Gibson's direction picks up a lot of the slack left by the standard narrative. The filmmaker has not lost his eye for impressive shots and blocking, staging the wartime sequences and even courtroom drama with equal bits of thrilling tension. Meanwhile, I, Robot and The Great Gatsby cinematographer Simon Duggan brings the horror, blood and grit of war to life vividly and sharply. In terms of the wartime action: Gibson provides visuals as bloody, horrible and yet thrilling as his Braveheart medieval clashes, making the Battle of Okinawa and fight for Hacksaw Ridge into sequences that rival Saving Private Ryan.

The cast of actors is strong, with Garfield, Vaughn and Worthington all emerging as strong standouts in the ensemble. Teresa Palmer and Rachel Griffiths's characters are woefully forgettable "worried wife" types, but Hugo Weaving steals scenes as Desmond's heartbroken and shell-shocked drunk of a father.

All in all, Hacksaw Ridge is the sort of film that would be easy to peg as instant Oscar bait; however, it's position in the current American cultural landscape is a precarious one. Hacksaw Ridge, like its protagonist, is something that's easy for both sides of this divided society to misconstrue: it can be deemed as anti-war or anti-military, or as indulgently violent; as Christian propaganda, or deluded right-wing jingoist nostalgia; as archaically pro-American, or as superficial representation of American values, presented by an outsider. What it's likely not going to be construed as, is the simple character story that it arguably is.

Still, it's a welcome return to form for Gibson as a filmmaker, and delivers what's arguably missing from so many film releases these days: and epic and eye-catching story, worthy of being viewed in the theater.

Hacksaw Ridge will be in theaters on November 4, 2016. It is 2 hours 11 minutes long, and is Rated R for intense prolonged realistically graphic sequences of war violence including grisly bloody images.