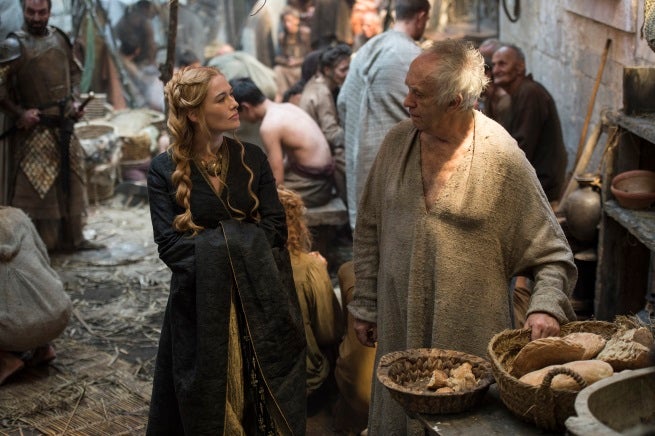 SPOILER WARNING For the Game of Thrones Season 5 finale.

Tonight's Season 5 Finale of Game of Thrones may show a particularly cruel and misogynistic form of punishment and humiliation.

Called the "walk of atonement," or sometimes the "walk of shame," the ordeal involves a woman being stripped naked, and sometimes shaved, and forced to walk through public streets. The degrading punishment is usually reserved for women accused of whoring or adultery.

A notable version of this punishment occurred following the death of Tytos Lannister, Tywin's father. After his wife's death, Tytos had taken up with a particularly domineering mistress. When Tytos died, Tywin had her stripped and forced to make a walk of shame through Lannisport and out into exile at the docks, confessing her sins to every man she met along the way.

It is Cersei Lannister who is expected to take the walk in tonight's finale. She will be forced into it by the High Sparrow, as a way of punishing and humbling her for her sexual deviations. Only after the walk will she be allowed to chose a champion to represent her in a trial-by-combat.

What Is The Walk Of Atonement On Game Of Thrones?