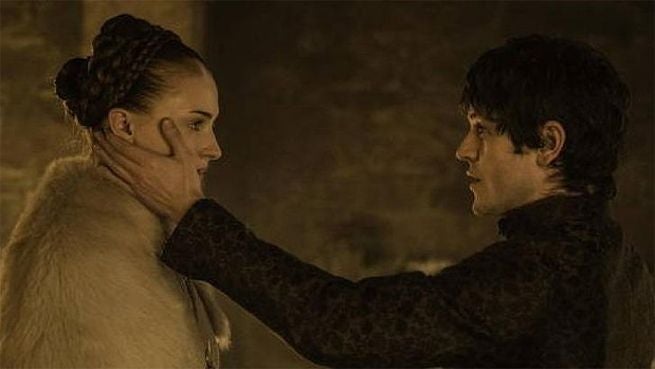 Martin discussed the wedding night of Ramsay Snow, and how the events of the television series differ from the events that transpired in the books, posted to his Live Journal account:

Let me reiterate what I have said before.

How many children did Scarlett O'Hara have? Three, in the novel. One, in the movie. None, in real life: she was a fictional character, she never existed. The show is the show, the books are the books; two different tellings of the same story.

There have been differences between the novels and the television show since the first episode of season one. And for just as long, I have been talking about the butterfly effect. Small changes lead to larger changes lead to huge changes. HBO is more than forty hours into the impossible and demanding task of adapting my lengthy (extremely) and complex (exceedingly) novels, with their layers of plots and subplots, their twists and contradictions and unreliable narrators, viewpoint shifts and ambiguities, and a cast of characters in the hundreds.

There has seldom been any TV series as faithful to its source material, by and large (if you doubt that, talk to the Harry Dresden fans, or readers of the Sookie Stackhouse novels, or the fans of the original WALKING DEAD comic books)... but the longer the show goes on, the bigger the butterflies become. And now we have reached the point where the beat of butterfly wings is stirring up storms, like the one presently engulfing my email.

David and Dan and Bryan and HBO are trying to make the best television series that they can.

And over here I am trying to write the best novels that I can.

And yes, more and more, they differ. Two roads diverging in the dark of the woods, I suppose... but all of us are still intending that at the end we will arrive at the same place.

In the meantime, we hope that the readers and viewers both enjoy the journey. Or journeys, as the case may be. Sometimes butterflies grow into dragons.

While Martin's comments concerning HBO series' resemblance to the book are fair, he may be missing the point as to the most controversial aspect of last night's episode. The entire fifth season of Game of Thrones has taken significant liberties with its source material.

What made "Unbent, Unbowed, Unbroken" such a point of controversy wasn't it's discrepancies, but a rape scene that many feel was, at best, sacrificing a female character to develop a male character or, less chartable, that served no narrative purpose whatsoever.

Game of Thrones airs Sundays at 9 p.m. on HBO.