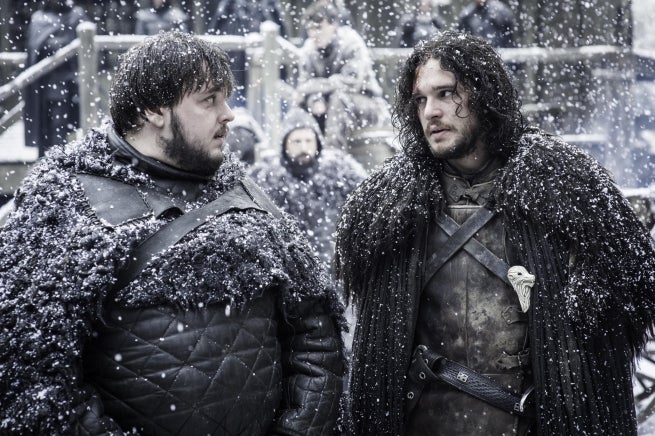 Jon recounts the battle at Hardhome to Sam. They discuss Longclaw. Sam asks how many Valyrian steel swords exist. Jon says not enough. Sam asks Jon to send him to Oldtown to become a maester, with Gilly and little Sam. Jon says he needs Sam at the Wall. Sam says he'd be more use to Jon as a maester. He also says he fears for Gilly's life while they're at Castle Black. Jon agrees to let him go. Late, Sam, Gilly, and little Sam leave.

Stannis marches on Winterfell. Sansa picks the lock on her door and heads outside. Podrick sees Stannis coming, and alerts Brienne. Sansa goes to the tower with the candle in her hand. Brienne moves from her post just before it's lit. Stannis begins setting his troops up for a siege, when an army of men rides out towards him. Sansa waits in the tower with her candle. Stannis draws his sword and marches forward, despite being vastly outnumbered. Sansa watches as Stannis' army is overtaken, then leaves the tower. Two men attack Stannis. Stannis kills them both, but is badly wounded. He props up against a tree and Brienne finds him there. Stannis admits to murdering Renly. Brienne sentences Stannis to death, and asks if he has any last words. He only tells her to do her duty. She executes him. Ramsay, meanwhile, finishes off what's left of Stannis' army. Sansa wanders the halls of Wintefell. She's found by Reek and Myranda, the latter holding a bow in Sansa's face. Myranda orders Sansa back to her room, but Sansa says she'd rather die. Myranda says Sansa won't die while Ramsay still need her to give him an heir. Myranda is about to begin on Sansa when Reek grabs Myranda and throws her from the wall. Just then, Ramsay's men return. Reek takes Sansa's hand and together they jump from the walls of Wintefell into the snow outside.

In Braavos, Meryn Trant beats three young girls. The third one doesn't cry when he strikes her. He hits her again and again, but she makes no sound. Meryn sends the other two away to focus on the third. He punches her in the stomach. The girl pulls off her face to reveal Arya underneath. She leaps at him, stabbing both of his eyes and then gagging him as he screams. She stabs him repeatedly in the chest. She tells him that he was the first person on her list, for killing Syrio Florel. She asks if Trant knows who she is, and then tells him that she's Arya Stark. Then she tells Trant that he's no one, nothing, and then slits his throat slowly.

Arya returns to the hall of faces and returns the face she took. Jaqan and the waif find her there and tell her she's taken a life, the wrong life. The waif says she's not ready. Jaqan tells her that she stole from the Many-Faced God, and only death can pay for life. Jaqen drinks from a vial and falls to the floor. The waif asks why Arya is crying. The waif becomes Jaqen. Arya pulls the face from the corpse Jaqen and there are only more faces underneath, until she sees her own. Then she loses her sight.

Trystane, Myrcella, Bronn and Jaime prepare to depart Dorne. Ellaria kisses Myrcella on the mouth before they leave. On the boat, Jaime gives Myrcella back her locket. She says she'll never take it off again. Jaime says he's glad Myrcella is coming home and that Trystane seems like a nice boy. They discuss Cersei and Jaime decides he wants to tell Myrcella something. Jaime tells Myrcella that you don't cchose who you love and fumbles on his words, but Myrcella stops him and tells him that she already knows about him and Cersei. She hugs him. As she pulls away, her nose starts bleeding and she falls to the ground. Watching from the docks, Ellaria's nose starts bleeding. She drinks an antidote from her necklace.

Tyrion, Daario, and Jorah sit in Dany's empty throne room in Meereen. Tyrion asks them both if they love her, and says it's hopeless for both of them. Missandei brings Grey Worm to the room. At first, he is unhappy to see Jorah, but they explain that Jorah saved her life. Jorah and Tyrion argue. They all decide they need to go find Dany. Daario points out that Tyrion would be more useful ruling Meereen than searching in the field. Grey Worm and Missandei will also stand by him. Jorah and Daario leave to find Dany.

Tyrion watches Jorah and Daario leave the city. Varys finds him there. Varys advices that information is the key to holding Meereen.

Dany admires the lush landscape as Drogon lies in a burnt pile of bones. Dany says they have to go home, but Drogon seems hurt. She tries to mount him again, but he is less receptive this time. He falls asleep instead. Dany wanders away, searching for food. She hears a horse and looks up to see a Dothraki. A whole khalasar surrounds her. She drops her ring on the ground beneath her.

Cersei sits in her cell. The septa enters and tells her to confess. She goes before the High Sparrow and confesses, saying she wants to be clean again. She confesses to sleeping with Lancel. She insists that there were no other men. The High Sparrow brings up the rumors of Cersei and Jaime, but Cersei says they're all lies. The High Sparrow says there will still be a trial over the sins she's denied. As a sign of the Mother's mercy, the High Sparrow agrees to let Cersei return to the Red Keep, but only after her atonement.

The septas strip and roughly bathe Cersei, and then cut her hair. She is brought to the front of the Great Sept. The High Sparrow declares the sins Cersei has confessed to and how she has agreed to cast pride aside and make her walk of atonement. The septas remove her clothing and she begins walking forwards through the crowds. The septa follows, chanting "shame, shame, shame" and ringing a bell as she goes. The Faith Militant part the way for her. The crowd calls her a whore and worse as she walks through. They begin throwing food at her, and some flash her. Other spit. Cersei falls to the ground. She sees the red keep in the distance and starts walking again. She enters the gate into the keep, where Kevan Lannister and Pycelle are waiting. Qyburn is quick to wrap her up. Qyburn introduces her to the newest member of the Kingsguard, a hulking man in gold armor who Qyburn says has taken a vow of silence.

At the Wall, Davos tries to convince Jon to bring men to fight for Stannis. Melisandre arrive at the gates. Jon asks after Stannis, and Davos after Shireen, but Melisandre remains silent. Later, Jon reads letters in his quarters. Olly enters and claims a Wildling knows where to find Benjen. Jon heads outside. Thorne points Jon in the direction of the man, but Jon only finds a sign that reads "traitor." Torne and several other men stab Jon, saying "for the Watch" as they do. Olly is the last. Jon falls over, and lies in the snow, blood draining from his body.