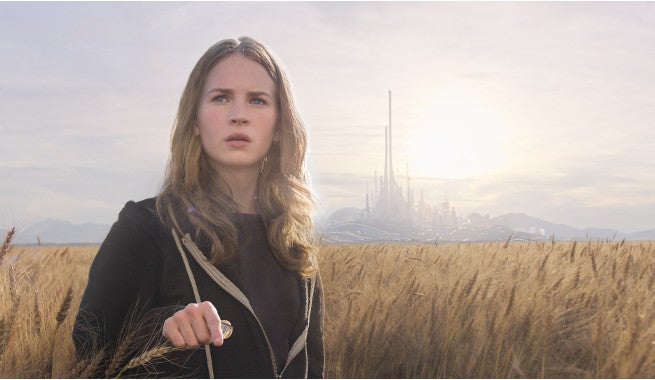 This weekend, Disney did what it does best: brought audiences to a land of pure imagination. Known for fairy tale films and imaginative theme parks, Disney combined the two for Tomorrowland.

Thanks to Brad Bird's direction, fantastic acting, and a persuasive script, Tomorrowland truly immerses its audience into a world of wonder.  To create such a place, a movie certainly needs to have all of it's components running in sync. In honor of the harmony Tomorrowland achieved, we've come up with the five elements that made the film so much fun.

As a fair warning, this post will contain spoilers for Tomorrowland's characters and story.

Thomas Robinson is the 8-year-old actor who commanded the screen for much of Tomorrowland's first act. Watching Robinson run around carrying his heavy jet pack bag while portraying the young Frank Walker was one of the film's most fun elements. The confidence he displayed when presenting his jet pack, the humor when he crashed, and pure acting ability launched the film as soon as it started.

I'm a big fan of Brit Robertson. She's a rising star with fantastic ability. Her performance made Tomorrowland fun. Where the pacing of the film would lack and leave audiences anxious for something to happen, Robertson's giddy energetic representation of Casey, the young, unpredictable, and imaginative teenager was just what the movie needed. Paired with Clooney's pessimistic Frank Walker, Robertson's Casey brought the light and heart the film needed.

Growing up, Casey's father told her a story about two different types of wolves - one that is dark and full of despair, and the other that is light and full of hope and heart. The two wolves will always fight, but which one wins? Casey wittily told the story to her father while he doubted his future with NASA, concluding that the wolf who wins is whichever you feed. The story sums up the message Tomorrowland tries to deliver, which essentially claims that staying positive will yield positive results all around you.

Although now we know Athena was actually a robot from Tomorrowland, it was still exciting to watch the little girl kick some serious butt. When Hugo and Hahn tried to capture Casey in hopes of finding Athena, they certainly bit off more than they could chew. Athena showed up with some raw action ability and high-tech futuristic gadgets, including one that stopped time inside of a bubble. It provided one of the film's most fun moments.

One half of Team "Bit Off More Than They Could Chew," was Hugo, played by Keegan Michael Keye. Keye is a great addition to any cast. From his entrance he injected a necessary energy and comedy to the film which was paced quite slowly for the first two thirds. The fun action sequence with Hugo and Ursula versus Athena was the first time Tomorrowland had any real action.

Will you see Tomorrowland this weekend? What was your favorite moment?

The Five Best Elements Of Tomorrowland