We've seen the horror genre offer some pretty fun and novel ideas in the last few years, with films like The Purge, Don't Breathe, and Get Out quickly becoming cult-classics. The Belko Experiment attempts to launch a grand new horror franchise concept - and is mildly successful in doing so. However, that concept gets played out in a very extreme manner, and would've benefited from a bit more restraint, and refinement.

Things take a serious turn when the Belko building gets shuttered with steel barricades, trapping everyone inside. Before the frightened employees can make sense of things, a voice comes over the PA system with some horrific instructions: the employees need to produce two corpses within a fixed time limit, or risk severe repercussions.

The employees all balk at the suggestion - until the puppet masters demonstrate that they have drastic ways of cutting the strings. Once the threat is confirmed as real, civility amongst the Belko team quickly begins to crack - leading to horrifically savage conflict.

The Belko Experiment is a collaborative effort between Australian director Greg McLean (Wolf Creek) and James Gunn (Guardians of the Galaxy vol. 2), who handled the script. It's a pulpy, gory, brutal and all-around fun horror flick; but like so much of McLean's work, it borders on exploitative with the way it agonizes the viewer - which is exactly what a lot of hardcore horror fans will probably love about it.

Visually, McLean has the talent for turning even the most gruesome acts into something cinematically lavish - even when he shamelessly delights in showing off something like a face being smashed in, one blow at a time. The Belko Experiment is well shot and well-paced, and on the whole it looks like a high-end horror product, despite its clearly B-movie nature.

Gunn's script is wonderfully simple and populated up with characters that (while adhering to the usual flat archetypes found in B-movie horror) are punched up with the filmmaker's dynamically eccentric energy. The Belko employees (and the actors playing them) are the right mix of workplace "types" you know and love/hate - but still unique enough to be worth rooting for/against when the Battle Royal starts, and the gore starts flowing. 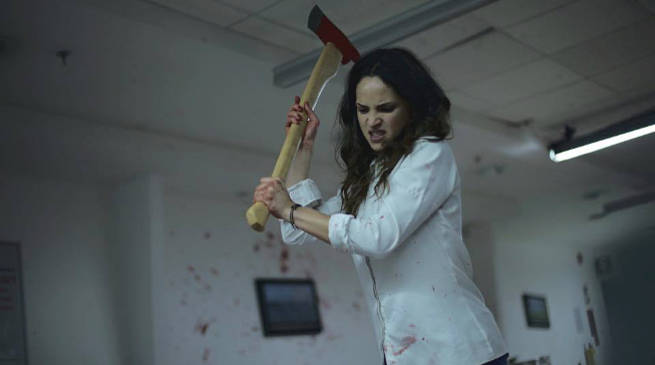 The film is also blessedly free of sappy dramatic character backstory; the only motivation is desperate immediate survival, leaving zero time for deep emotions or long meaningful talks. Instead, Gunn utilizes the ensemble format and spreads the screen time around, focusing on team dynamics and interpersonal tensions, Guardians style.

In the end, The Belko Experiment is (as we expected) a modest niche gem: it'll be a hell of a lot of fun for hardcore horror fans, but will probably feel a bit too sadistic for more mainstream viewers who are hoping for something like another Purge.

Are you seeing The Belko Experiment? Rate the film for yourself in our composite rankings below!

The Belko Experiment is now playing in theaters everywhere. It is 1 hour 28 minutes long, and is Rated R for strong bloody violence throughout, language including sexual references, and some drug use.

The Belko Experiment Gets Sadistic with Workplace Horror