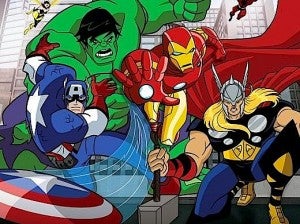 While The Avengers may be the summer's most-anticipated movie and be tracking to make over $150 million in its opening frame at the box office, that enthusiasm isn't translating to the small screen. Topless Robot is reporting that The Avengers: Earth's Mightiest Heroes, which airs alongside Ultimate Spider-Man in Disney XD's Marvel Universe programming block, is struggling so badly in the ratings that they may scrap the show at the end of its second season later this year and replace it with a new, rebooted Avengers cartoon, probably one with ties to Ultimate Spider-Man. Reports that the show was in danger reportedly first popped up at ComicBookMovie.com, but Topless Robot reports that their piece is based not only on that initial report but also information from their own sources. "While CBM is quick to blame newly appointed Marvel TV head honcho Jeph Loeb -- and boy, has he f---ed over the Avengers in the past -- it's not entirely his doing," opined Topless Robot. "Disney obviously wants a show with higher ratings, and feels that an Avengers cartoon should be doing better." The post goes on to encourage fans of the show to buy the DVDs, watch the show on Netflix and talk it up to friends in hopes of reversing both the ratings trend and the show's fortunes, but that seems unlikely; usually by the time a studio has a concept in place for the show's replacement, it means they're pretty committed to the change.