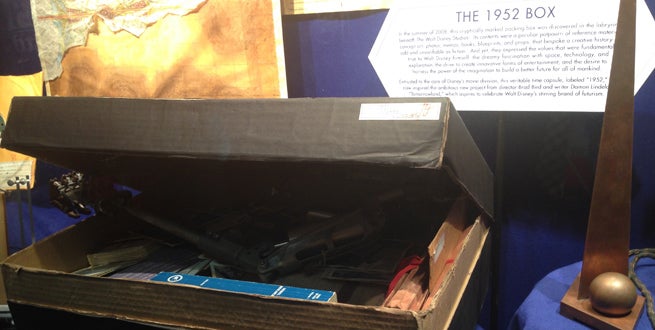 The world of Tomorrowland has long lived at Disneyland in Anaheim, California. But now, Tomorrowland assumes a new and mysterious shape with the Walt Disney Studios film based on the theme park attraction. With only a park attraction and a few trailers to rely on for context, little is actually known about the film. But, thanks to a new attraction in Disneyland's old "Captain E-O" theater, park-goers can access Disney's biggest look inside the film yet.

Between now and the May 22, 2015 release of the film, fans visiting Disneyland can access the special attraction for free. Entering the queue, you're treated to the film's concept art, still shots, and signs and pictures from the film's world. Ahead of the sneak peek, you can spot pictures from The 1964 World's Fair, where Walt Disney himself debuted such long-running attractions as "It's a Small World" and "Carousel of Progress."

After the images, you're ushered into the theater for a special sneak peek of the film. The footage roughly amounts to a 12-minute prologue. You meet a 12 year-old Frank, before he grows into George Clooney's character. An inventor Frank is clearly smarter than your average preteen. He brings his homemade jetpack to a competition at the 1964 World's Fair, but apparently washes out. Thanks to the intervention of a pretty, and mysterious, young girl about his age, Frank is then welcomed on a fantastic journey. After a short ride on "It's a Small World," he is moved into a strange tranport and sent to the titular realm of Tomorrowland.

We won't spoil anymore for you, suffice to say it's exciting and mysterious content. Both young Frank and Athena are adorable, and portray a surprising maturity for children thrown into wild situations. Hugh Laurie is stiff and more than a little intimidating - his character David Nix doesn't seem much like the guy you'd want to have a drink with. The clip definitely left me anxious for more, and with a slightly better idea of just what the mysterious Tomorrowland is.

Of course, that mystery is only heightened by the film's origins. As mentioned at the 2014 New York Comic Con, the movie was birthed from a mysterious time capsule that Walt Disney hid within the labyrinthine corridors underneath Disneyland. The capsule contained sketches, newspaper clippings, photographs, comic books, and multiple notebooks full of Walt's own ideas, some fleshed out and some just a single line jotted down. Much of the material centered around his famous ideas of a city of the future - forming the basis of the film Tomorrowland, as conceived by filmmakers Brad Bird and Damon Lindelof.

The exhibit following the film preview shows more concept art, plus props, costumes, and even the infamous 1952 capsule! Carefully curated, there are lots of teases but not a lot of spoilers or blatant answers in the display, and any Disney fan will be thrilled to see some of Walt's own sketches and ideas right there, just a sheet of glass out of reach.

For those who can't make it out to Anaheim, CA, or who simply want to take a longer look at the materials, a gallery with virtually every piece of art, prop, and display item below. Consider it a virtual tour into Tomorrowland. All you'll miss are the videos, narrated by Lindelof, which discuss the film's development and creative process.

Tomorrowland hits theaters from Walt Disney Studios May 22, 2015. The Disneyland display and sneak peek are open to paying ticketholders now.

Take An Inside Look At Disneyland’s "Tomorrowland" Exhibit