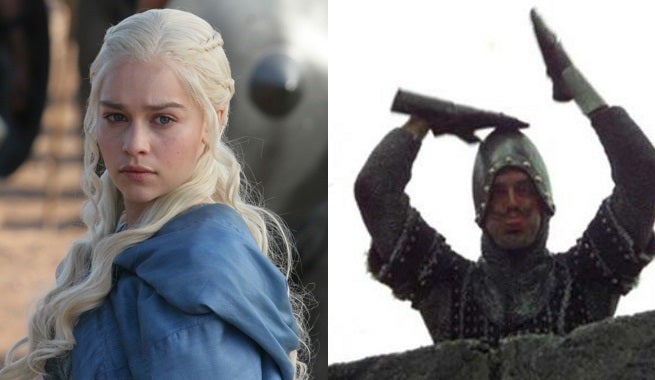 Game of Thrones is known for being set in a dark and scary world, but apparently some of its characters have a sense of humor as well. The show's writers tell the Daily Mail that they actually hid a Monty Python reference in an important scene from Season 4.

When Dany's march across Slaver's Bay brought her to the gates of Meereen, the city sent a champion out to meet her. While Missandei translated the rider's taunts…differently, writer David J. Petersen says he was quoting John Cleese's lines as the French Taunter from Monty Python and the Holy Grail in Low Valyrian, shouting "I fart in your general direction! Your mother was a hamster and your father smelt of elderberries. You don't frighten us, English pig-dogs! Go boil your bottoms, son of a silly person! I wave my private parts at your aunties!"

While a guide to the Dothraki language was recently published, no such guide for Low Valyrian exists as of yet, so we'll have to take Petersen's word on this one. On the other hand, maybe this is just the key fantasy linguists need to reference engineer such a guide to Low Valyrian.