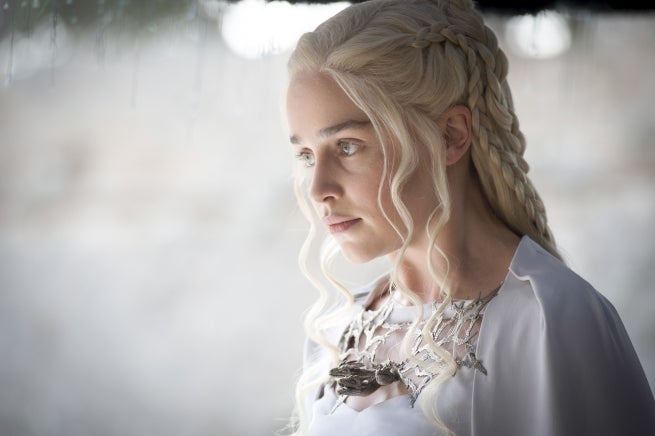 HBO has released the title and synopsis for the final two episodes of Game of Thrones’ fifth season.

Episode 9 will be titled “The Dance with Dragons.” Here’s the synopsis:

A Dance with Dragons is the title of George R.R. Martin’s fifth novel in the A Song of Ice and Fire series, which has been the primary inspiration for this season’s storylines. Within the universe of these stories, “The Dance with Dragons” is the name given to Targaryen civil war of succession between Aegon II and Rhaenyra Targaryen, which resulted in both of their deaths and the ascension of Aegon III.

The “traditional celebration of athleticism” referenced in the synopsis is likely the opening of the great games in the arena in Meereen, and will likely be the climax of Dany’s storyline for this season.

The season finale, episode 10, will be titled “Mother’s Mercy.” Here’s the synopsis:

In the religion of the Seven, sinners beg for the “Mother’s Mercy.” The most obvious reference here is to Cersei seeking forgiveness after being imprisoned by the High Sparrow. It’s also worth noting that motherhood has been a big theme of this season, and that Cersei is one of two important mothers playing the “game of thrones:” Cersei is the Queen Mother, but Dany is the Mother of Dragons.

“Stannis marches” suggests that the finale may be where we’ll finally see the battle between Stannis’ forces and those of House Bolton for control of Winterfell. This likely means that the decision Stannis needs to make in “The Dance with Dragons” concerns Shireen’s life.

The title of the episode also fuels a certain rumor concerning the season finale. Potential SPOILERS ahead.

Back in February, IMDB had Michelle Fairley – the actress who played Catelyn Stark – listed as appearing in the season finale, with her character simply listed as “hooded woman.” IMDB has been wrong before, and the listing has since been removed, but many fans took that is an indication that Lady Stoneheart would be appearing in the finale. Stoneheart was expected to appear in the finale to Season 4, but did not, and the creators have insisted that there are no plans to include the character at all. However, one of the names that Lady Stoneheart goes by is “Mother Merciless.” Considering the position Catelyn’s daughter, Sansa, has been put in this season, some fans in the Game of Thrones community are already taking the finale’s title as a hint that Stoneheart will indeed be appearing – or, alternatively, that the Game of Thrones showrunners are purosefully messing with them.

For my part, I don’t think it’s either. There’s enough meaning behind “Mother’s Mercy” without considering Stoneheart at all that it makes sense as an episode title without it having to be a hint or a troll at all.