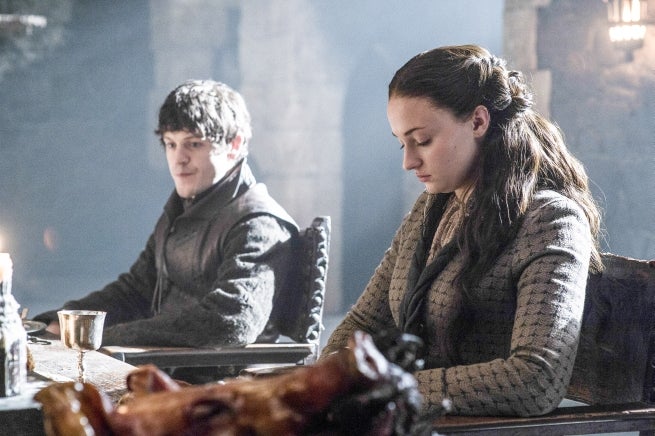 Missandei watches over Grey Worm as he lays unconscious in bed. Daenerys and Daario watches over Barristan Selmy’s lifeless corpse. HIzdahr enters and expresses his condolences. Dany grieves while Daario starts strategizing their next move. Dany says she wants the leader of each of Meereen’s great families brought to her. Hizdahr points out that he is the leader of his own house, and the guards take him away.

Dany brings the house leaders to the chamber where she keeps he two remaining dragons and forces them inside. Dany says a good mother disciplines her children if she must, but she does not give up on them. She has Daario push one of the leader forward, and one of the dragons breaths fire on him. The dragons share a meal. Dany almost pushes Hizdahr forward as well. He says “valar morghulis,” and she decides to let him live for now. She has the remaining leaders escorted away.

Sam reads a message regarding Dany’s status in Slavers Bay to Maester Aemon, who laments that Dany’s last remaining family, himself, is unable to do anything to help her. Jon enters and asks to speak to Aemon alone. Sam departs. Jon asks Aemon for advice, saying that there’s something he has to do that he knows will divide the men, with half of them hating him for the decision. Before he can even explain what the decision is, Aemon tells him to do what needs to be done. Aemon tells him to “kill the boy, and le the man be born.”

Jon meets with Tormund. He asks where the rest of the Free Folk are and who leads them. Tormund says they still follow Mance. Jon offers to free Tormund and allow him to take up leadership. Jon explains that Tormund is not his enemy. He says that the Night’s Watch are sworn to protect the realms of men, and the Free Folk are part of that. Jon offers the Wildlings land to settle south of the Wall if they agree to fight with the Night’s Watch when the time comes. Jon accuses Tormund of being too cowardly to make peace. Tormund says it’s an easy thing to say to a man in chains. Jon unchains him. Tormund goes along with Jon. He tells Jon that most of the Free Folk are at Hardhome and they’ll need ships to get there. Tormund also says he won’t leave unless Jon goes with him.

The Night’s Watch gathers. As expected, the Night’s Watch isn’t happy about Jon’s decision. Sam backs Jon, but the rest are angry. Jon warns that if they don’t help the Wildlings now, they’ll only end up joining the army of the White Walkers as wights.

Ollie brings Jon his meal and tries to quickly exit, silently. Jon stops him and tells him to say whatever is on his mind. Ollie believes Jon must be trying to trick the Wildlings, but Jon says it’s no trick. Jon says he knows this is hard, but winter is coming, they know what’s coming with it, and they can’t face it alone. Ollie is unmoved and takes his leave.

Brienne watches Winterfell from her room in a town nearby. Pod tries to tell Brienne that Sansa is kay now, she’s home and away from the Lannisters. Brienne says Sansa is in danger even if she doesn’t realize it. A servant enters the room. Brienne asks if he knew Lord Eddard. The servant says the Starks are gone now, that the Boltons are in Winterfell. Brienne says there’s a Stark in Winterfell now, and that she needs to get a message to her. Brienne says she still serves Lady Catelyn and asks who the servant serves.

Myranda is expressing some bitterness over Ramsay’s betrothal to Sansa. He assures her that he’ll still have time for her even after he’s married, but she’s still angry. Ramsay reminds her what happens to those who bore him, and they resume their rough lovemaking.

Sansa is in her room and her serving woman enters. The woman tells her that she’s not alone in the North, and that if she ever needs help to light a candle from the highest tower.

Sansa enters the Godswood. Myranda follows and asks Sansa about her dress. After introducing herself, she examines the dress more closely. Sansa says she made the dress herself, that he mother taught her how. Myranda says that’s a gift, so that whenever she makes something she’ll think of her mother. Myranda says there’s something else to make her remember.

Myranda brings Sansa to the kennels. She tells Sansa there’s a surprise at the end and sends her inside. IN the last kennel, she finds Reek/Theon curled up on the ground. She calls him Theon, but Reek just shakes his head. He tells her she shouldn’t be here, and pulls away when he moves towards her.

Later, Reek dresses Ramsay and pours his wine. Ramsay asks if Reek has something to tell him. Reek says no at first, but then admits that Sansa saw him. Ramsay says Reek mustn’t keep secrets from him. He tells him to get on his knees and give him his hand. Ramsay takes it and says he forgives him.

Ramsay, Roose, Sansa and Walda take dinner together. Ramsay offers a toast to his and Sansa’s wedding. Ramsay calls for more wine, and Reek brings it. Ramsay asks if Sansa is still angry about what Theon did. He says the North remembers, and that he punished Theon. He’s not Ironborn anymore, but a new man. Not Theon Greyjoy, but Reek. Ramsay says Reek has something to say to Sansa. Ramsay tell him to apologize for what he did and the murder of her two brothers. He apologizes without looking at her first. Ramsay forces him to do it again, better. Once it’s done, Ramsay points out that Reek is the nearest thing to kin that Sansa has there and decides Reek will give Sansa away at the wedding. Roose and Walda announce that they’re pregnant, and that it’s probably a boy.

Later, in private, Ramsay and Roose discuss the pregnancy. Ramsay is angry and mocks Walda, but Roose counters by saying Ramsay embarrassed himself at dinner. Ramsay is worried about his position. Roose points out that Ramsay has never asked about his mother. Roose tells Ramsay she was a peasant girl, wife of a miller that he had hanged before raping her. She showed up a year later with Ramsay. Roose had the woman whipped and the baby throne in the river, but then saw that the boy was his son just as he does now. Roose says that Stannis is coming for Winterfell, and asks for Ramsay’s help in defeating him.

Sam and Gilly are in the library. They talk about how many books there are, and Gilly displays her ignorance over just how many books there really are in the world. Sam talks of the Citadel in Hightown and how he thought of being a maester before being sent to the wall. Stannis enters and Gilly leaves. Stannis knows of Sam’s father. Stannis asks how Sam killed a Walker. Sam tells Stannis about the dragon glass, but he still doesn’t know why it worked. Stannis says the dead will march on the wall and that they need to know how to fight them. Stannis tells Sam to keep reading.

Stannis finds Davos and says it’s time to march. Davos suggests waiting for Jon to return with more Wildlings, but Stannis is worried about the coming winter. Stannis also says that the queen and princess will be coming with them.

Stannis’ men prepare to leave Castle Black. Shireen speaks to Davos of wanting to visit the crypts at Winterfell where all the Kings in the North were buried. Stannis tells Jon that he hopes he knows what he’s doing. Stannis says he needs those ships he’s loaning Jon, and Jon swears to return them. Jon meets eyes with Melisandre before Stannis’ people ride out.

In Meereen, Missandei watches Grey Worm and he finally wakes. He asks about Barristan Selmy. Grey Worm feels shame over what happened, but he explains it’s not because he was wounded in combat, but because he felt fear, not of death but of never seeing Missandei again. Missandei kisses him.

Later, Dany asks Missandei for her thoughts on what to do about the masters. Missandei tells Dany that she can often see a better choice than any of her advisors.

Dany finds Hizdahr in his cell. He begs for mercy, saying he doesn’t want to die. Dany tells Hizdahr that she was wrong and Hizdahr was right about tradition and bringing the people of the city together. She agrees to reopen the fighting pits, but to free men only. She then says she will marry Hizdahr to form a lasting relationship with the Meereenese people.

Tyrion walks up on the boat with Jorah and asks where they are now. Jorah remains silent. Tyrion apologizes for what happened before. Tyrion asks for wine, but Jorah refuses. Jorah sees land coming into view. Tyrion recognizes it as Valyria. Tyrion warns of the “doom,” but Jorah is counting on it to keep pirates way. They sail down the smoking river through Valyria. Tyrion recounts a poem about the doom from the history books, recounting how the ground cracked and fire burst forth, burning the city to the ground. A dragon comes into view, flying overhead. A stone man drops into the sea, and then another onto the boat. Jorah warns Tyrion not to let them touch him as Jorah fights them off. Tyrion begs Mormont to cut him free as more stone men crawl on board the ship. One of the stone men chases Tyrion until he falls overboard. A stone man grabs Tyrion and rags him down in the water.

Tyrion awakens and sees Jorah’s face. Jorah cuts the binding off of Tyrion. Jorah asks if any of them touched him. Tyrion shakes his head and Jorah says the same. Tyrion says he’s seen greyscale before, but nothing like that Jorah supposes that’s why the send the stone men away. Jorah says they walk from here, but rest for now. Jorah looks out over the water. When he sees that Tyrion is turned away, he rolls up his sleeve to reveal a spot of greyscale.

Mark Wahlberg Reveals What Actor Should Play Him in a Biopic