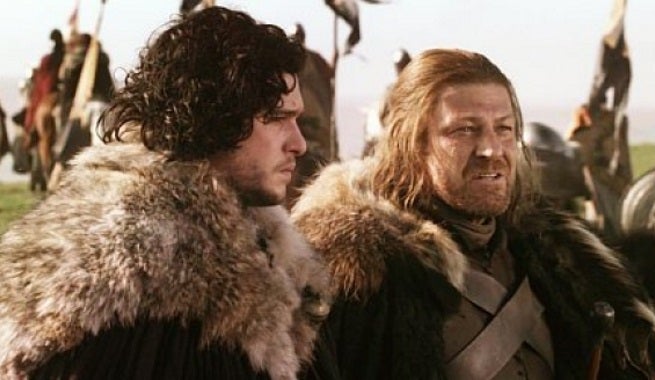 Sean Bean, the actor who played Ned Stark in the first season of Game of Thrones, is once again stating his belief that Ned was not Jon Snow’s biological father.

Bean has expressed this theory before, telling Vulture in response to a question about the possibility of him returning for a flashback scene, "I've definitely got some unfinished business that needs to be resolved there. I'm obviously not Jon Snow's dad. And you need that to be revealed at some point, don't you?"

Now, with the show lightly touching on Jon’s mysterious parentage in episodes of Season 5, Vulture brought the point up to Bean again, who said, "He’s not my child. He isn’t. That's what I suspected all along."

If this ends up being true – and we don’t know for certain that Bean actually knows anything that fans don’t – Bean says he thinks the revelation could lead to some interesting stories.

“I think that’s probably an interesting journey for Jon Snow as a character and for [Kit Harington] as the actor,” he says. “He’s been very fortunate in being one of the characters that had a very meaty, substantial, very complex story to be able to discover for himself. He’s been lucky to survive!"

Early in the first season of Game of Thrones – and early in the novel of the same name – Eddard promises Jon, just before Jon leaves for the Wall, that the next time they meet they’ll discuss Jon’s mother. Unfortunately, things don't go well for Ned in King's Landing, and the two never see each other again.

Fans have been theorizing about Jon’s parents for years, with the “R + L = J” theory among the oldest in all of Game of Thrones fandom. If you don’t know what that equation means, and are curious and don’t mind possible spoilers, click through the spoiler shield below.

Will we find out who Jon’s parents are before the end of Season 5? Maybe. It’s been a topic of discussion between Stannis and Selyse, perhaps foreshadowing things to come. We also know that Melisandre is capable of blood magic, and has taken an interest in Jon lately. We’re only half way through the season, so a lot could still happen.