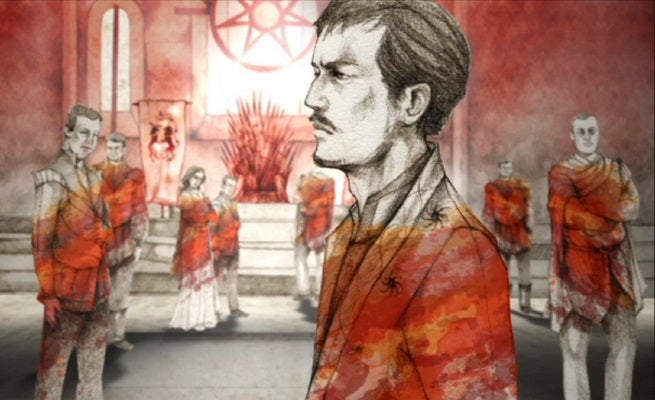 Tonight’s new episode of Game of Thrones is titled “Unbowed, Unbent, Unbroken.” These are the words of House Martell, the Great House that rules Dorne. As it seems the show is going to be focusing more on Westeros’ southernmost kingdom, we thought it might be a good idea to let readers know what’s what and who’s who in the sandy, southern nation.

A Brief History of Dorne

While the Andals were responsible for creating most of the kingdom’s that make up Westeros, the region now known as Dorne was left untouched aside from a few low grade warlords. Instead, the kingdom of Dorne was established by the legendary warrior-queen Nymeria, who fled Essos down the Rhoyne River during the Rhoynish wars with a fleet of ten thousand ships. Nymeria allied with and married Lord Mors Martell, of the then humble House Martell, and together they conquered the entire region and unified it under the sunspear banner.

Nymeria’s influence on the house and country continues to this day. House Martell’s full title his House Nymeros Martell, indicating that it is of the line of Nymeria. The House also follows Rhoynish custom when it comes to the inheritance of lands and titles, allowing them to pass to the oldest child regardless of gender.

Another important part of Dornish history is hinted at in House Martell’s words, “unbowed, unbent, unbroken.” When Aegon Targaryen arrived in Westeros with his dragons, he forced most of Westeros to unify under his rule by conquest. By contrast, Dorne remained independent for 200 years following the Targaryen war. Aegon himself decided that any effort to conquer Dorne would be too costly. Some of Aegon’s successors attempted to force Dorne to join the Realm, but all failed. Dorne finally joined the realm through an alliance, solidified by a dual marriage between a Targaryen prince and princess and a matching pair from Dorne.

At the time of Robert’s Rebellion, Elia Martell was married to Prince Rhaegar Targaryen, and had borne the prince two children. When Rhaegar named Lyanna Stark the queen of love and beauty, and later stole her away and sparked the Rebellion, the Martells still backed the Targaryens. The Rebellion ended with Robert victorious, and Ser Gregor Clegane, in the employ of House Lannister, raping Elia and murdering her and her children. The Martells have harbored a hatred for the Lannisters ever since.

Since the war, while officially remaining a part of the realm, Dorne has become isolationist, withdrawing from most of the affairs of Westeros and its Great Houses and dealing more often with the Free Cities of Essos. They were drawn back into the politics of Westeros when Tyrion sent Princess Myrcella to Dorne for protection, and invited Prince Doran to sit on the small council, an invitation that Prince Oberyn accepted in Doran’s stead.

Here are the major players in Dorne: 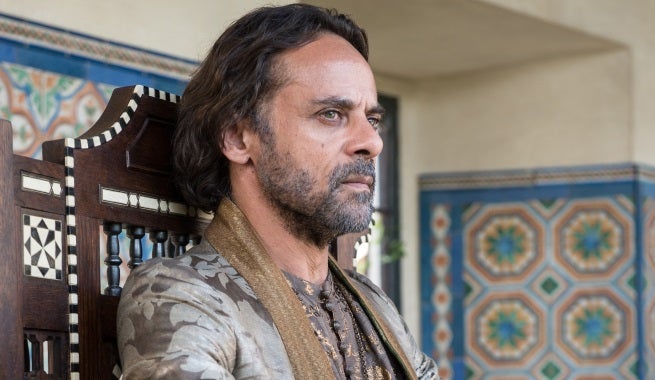 Prince Doran is the current head of House Martell. Breaking with Dornish stereotypes, Doran is a pensive and stoic leader. He has a severe case of gout, which keeps him bound to a wheelchair. He rules from the water gardens, rather than the traditional seat of power at Sunspear, to hide from the eyes of the public, so they do not see him in his weakened state. Read more about his history in our previous profile. 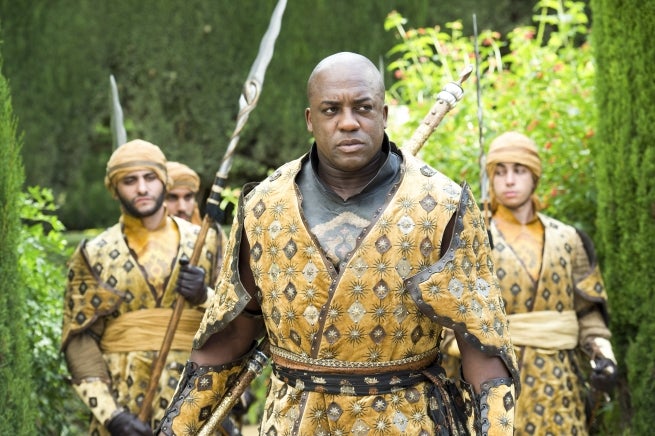 Areo is the personal bodyguard of Prince Doran. He is originally from the city of Norvos, but entered into the service of House Martell when Doran married the Norvoshi noblewoman Mallario. Since then, Areo has been Doran’s most loyal companion, living by the mantra “serve, obey, protect.” 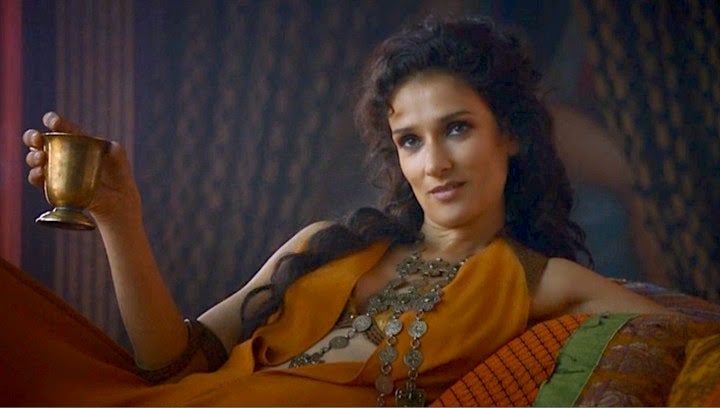 First appearing in Season 4 of Game of Thrones, Ellaria was Oberyn’s paramour before his death and a bastard of the noble House Uller. Though they were not wed, Ellaria is the mother of five of Oberyn’s eight daughters. In contrast to her portrayal in the novels, where she worries that the pursuit of revenge for Oberyn’s death will lead her younger children to harm, Ellaria in Game of Thrones is leading the charge for war against the Lannisters, arguing with Doran and rallying the Sand Snakes to her cause. 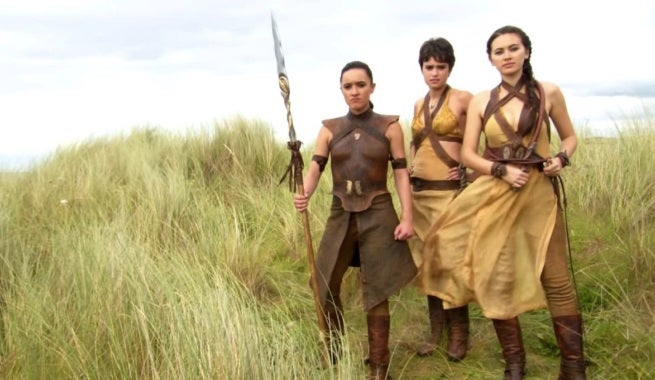 The Sand Snakes are Oberyn’s bastard children. The show has introduced the oldest three – Obara, Nymeria, and Ellaria’s eldest daughter, Tyene. Each is as fiery as their father, and love to fight. They’re on the warpath, seeking revenge for their father’s death, and they may turn their attention to Princess Myrcella to find it. Learn more about the Sand Snakes in our profile. 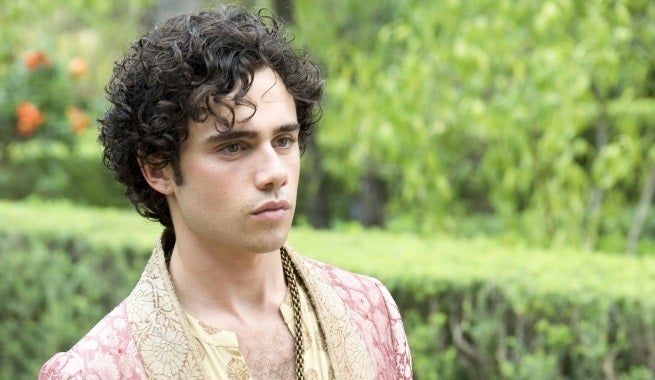 Trystane is the youngest son of Doran, and is betrothed to Myrcella. He hasn’t been much more than a background character in the show or the novels so far, but he’s said to be a handsome and affable boy who enjoys Myrcella’s company. 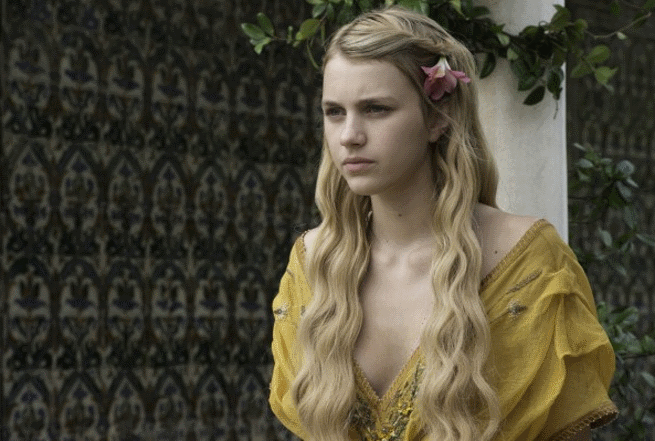 Cersei’s middle child and only daughter, Myrcella was betrothed to Trystane and sent to Dorne by her uncle, Tyrion, who was seeking to protect her from the coming assault on King’s Landing. Recent events have left her in dangerous position. In the books, she’s becomes an unwilling participant in a plot by Arianne Martell, the heir to Prince Doran. Arianne plans to pronounce Myrcella the Queen of the Seven Kingdoms, noting that Myrcella is older than Tommen and would be heir by Dornish custom, in hopes of sparking a war. Game of Thrones so far hasn’t shown any hint of this plot, or Arianne. Instead the Sand Snakes seem intent on taking a more direct route to war by doing Myrcella bodily harm. 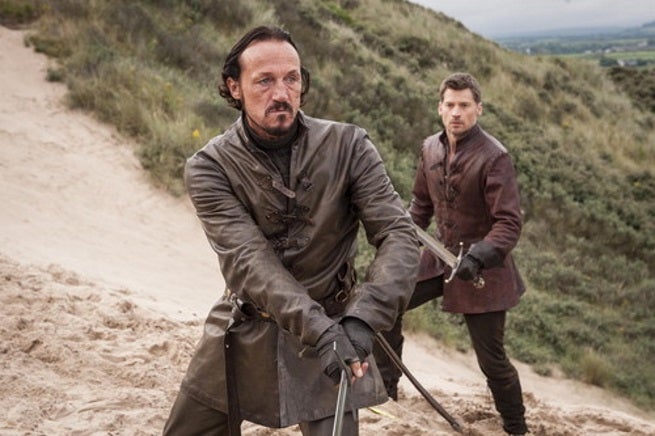 Jaime and Bronn have travelled to Dorne in an attempt to save Myrcella. This storyline does not happen in the books, where Bronn is no longer a significant player after Tyrion’s trial and Jaime leaves King’s Landing for Riverrun rather than Dorne. This seems to put them on a collision course with the Sand Snakes, but we’ll have to wait and see how that all pans out.

Game Of Thrones: Everything You Need To Know About Dorne