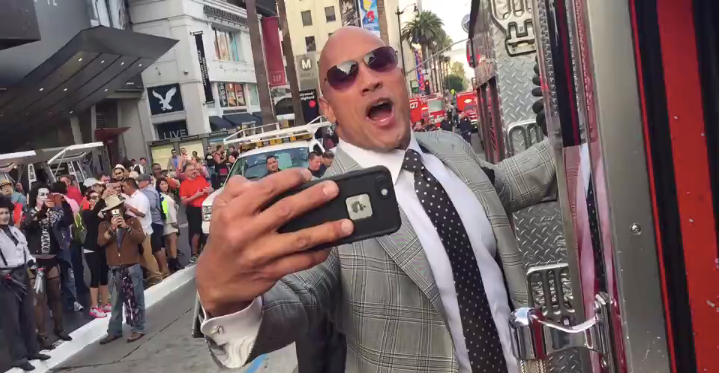 When you're Dwayne "The Rock" Johnson, you don't take limos to your Hollywood premieres—you take fire trucks.

The San Andreas star made an entrance to match his stature earlier this week, by hitching a ride to the film's premiere on a Los Angeles Fire Department fire truck. Riding through downtown L.A. in the rescue vehicle, Johnson caught the eye of everyone around him—well, more so than usual.

You can check out Johnson's picture and video of the ride below.

Who needs limos to arrive to my #SanAndreas red carpet premiere, when I can just hitch a ride with the boys. #LAFD #Family #EpicArrival #CrowdWasInAFrenzy #ChineseTheater

One of the greatest and most epic red carpet premiere arrivals in the history of Hollywood.. Thank you LAFD, thank you Warner Bros. Pictures and all our press friends. But most of all.. THANK YOU FANS. #LAFD #TaskForce27 #ArrivingInStyle #AndOnFire San Andreas #HollywoodPremiere #Monumental

Posted by Dwayne The Rock Johnson on Wednesday, May 27, 2015

San Andreas hits theaters on May 29.

The Rock Takes A Fire Truck To San Andreas Premiere