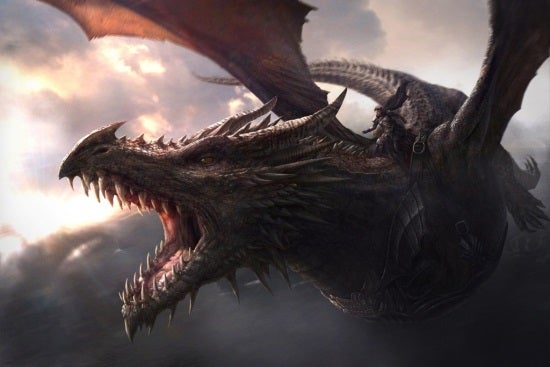 George R.R. Martin has released an excerpt from The World of Ice and Fire, an upcoming companion book to his A Song of Ice and Fire series. The text of the excerpt tells the history of Aegon Targaryen, a.k.a. Aegon the Conqueror, who united the Seven Kingdoms of Westeros into a single nation. He was largely successful in this because he had three dragons under his command, which he and his sister-wives rode into battle. Along with the text, Martin also including an image of Aegon riding Balerion the Black Dread (from artist J. Gonzalez), the oldest and largest of his dragons. Fans of Game of Thrones have yet to see a full-grown dragon, even though Daenerys' grew quite a bit between seasons three and four, making this their first glimpse of an adult dragon. And he's terrifying. In "The Lion and the Rose," Bran Stark saw a vision of a dragon's shadow passing over King's Landing. Could this be a premonition of things to come? The World of Ice and Fire will be released in October 2014.