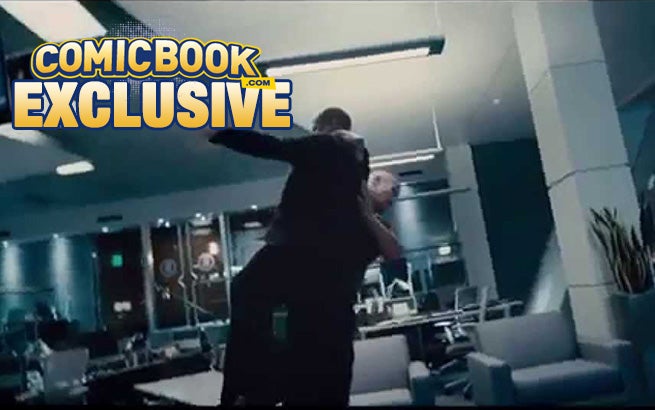 One scene from the Furious 7 trailers that caught all Dwayne Johnson fans' attention, was when the Hobbs character delivered The Rock's WWE finishing move, The Rock Bottom, to Deckard Shaw (Jason Statham). Earlier today, ComicBook.com caught up with Furious 7 director James Wan for an exclusive interview and, of course, asked how the glorious moment came about.

CB: One of the most talked about parts from the trailers and the people who has seen the film, is Dwayne Johnson hitting Jason Statham with his signature WWE move, The Rock Bottom! Who's idea was that?

Wan: That has go to Mr. Dwayne Johnson himself. Dwayne wanted to bring one of his trademark wrestling moves into that sequence and I welcomed it. I thought, you know what, if this is a big moment for Dwayne, I really want to shoot it in a way that really emphasizes it. So, when that moment came the camera spun and it just takes the audience right into it.

CB: Yeah, it felt like you were riding with it.

Wan: Yeah, exactly. That was the whole point. I really wanted my camera to put the audience into the fight and into all the action and stuff. I think that's important because I generally find action movies... Action films you just get to watch as a spectator from really far away. I don't want that, I want to put you inside the aquarium. I want you to be swimming with the sharks and all the fish.

Stay tuned to ComicBook.com as we'll have more from our interview with James Wan coming soon! Furious 7 is now playing in theaters.

In the mean time, we're giving away some awesome Furious 7 gear all week next week! You can enter right here, it's totally free!