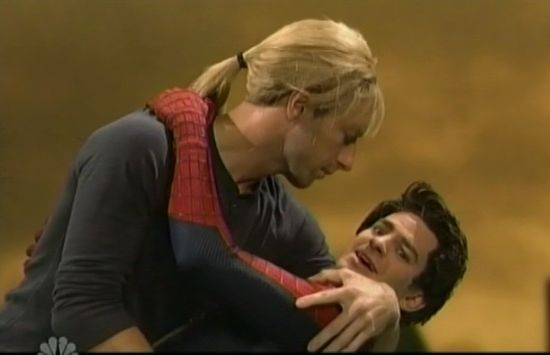 Spoiler Warning: If you were watching Andrew Garfield hosting Saturday Night Live, then you probably already know that SNL spoiled an important scene from Amazing Spider-Man 2.

During a sketch on Saturday Night Live, Andrew Garfield and Emma Stone were shown trying to film a scene from Amazing Spider-Man 2 where Spider-Man took Gwen Stacy to the top of the Brooklyn Bridge for a grand final romantic kiss.

In their initial attempt at the kiss, Garfield and Stone wound up licking each other’s faces. When the director called cut and explained the kiss was a little off, Stone said she actually thought it was pretty hot.

Subsequent attempts at kissing also came up flat for Garfield and Stone, so the director played a scene of them kissing in the first movie in hopes that it would help. However, the playback footage showed that stunt doubles were used for the kissing scene in the original Amazing Spider-Man.

Coldplay’s Chris Martin offered to try to help with the scene, and the director said it was up to the actors. Emma Stone gave a big “yeah,” and Martin helped Stone down from the stage. Then, Martin asked for a wig and recreated the scene with Andrew Garfield.

Martin and Garfield shared a passionate kiss, while Stone and the director watched. The director said, “No one’s ever kissed like that before, and they never will again.”

The scene ended with a Variety headline that read, “Amazing Spider-Man 2 has a weird ending.”