The episode opens in the Psych office, where Shawn is talking to the camera. He's talking about Gus's new job. It seems ideal, with creature comforts, a much nicer company car and a beautiful co-worker Gus is cyber-stalking.

Shawn tells the camera that he's made a decision -- he's closing Psych to go up to San Francisco to follow Juliet. He hasn't, though, told Gus yet.

At the Santa Barbara Police Department, Shawn is walking Gus through the lobby; he tells Gus that he's raided Gus's earthquake preparation kit, eaten all the food and used the blankets to make a fort. He tells Gus that he needs him to brace himself for some truly disturbing news. He collapses on one knee in the middle of the office. Cut to the Psych office, where he's doing the same thing, telling the camera that he didn't have a plan until the moment Lassiter came to bring them to a crime scene.

At the murder scene, Gus wants to know what the bad news is, but Shawn says he's not ready. The murder victim's business partner comes over and tells him about finding the body. Shawn gets hostile with the witness, and Lassiter takes him outside to tell Shawn this is the wrong place to tell Gus; he's already figured out what Shawn is doing, and tells him to leave the crime scene and take care of Gus. 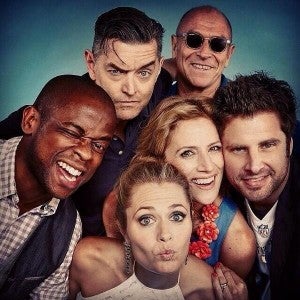 Back at the morgue, Brannigan, Woody and Lassiter are using a map and a tablet  computer to figure out where the body had been dragged from when he was killed; they go to the spot and find a hole about the size of a pirate's chest or filing cabinet in the damp ground.

At every turn, Brannigan is using her insane skills to keep three steps ahead of Lassiter and the Psych guys; she figures out who their suspect is based on footprints and finds him based on ATM cameras in the area. But when they get there, just before Shawn and Gus can "break up," it turns out the suspect is dead.

Back at Gus's awesome, new office, Shawn is eating food from the snack bar and sees the girl Gus is interested in. He almost breaks down on her shoulder thinking about leaving Gus alone, but she's not sure who Gus even is. When Gus comes around the corner, Shawn sees him and hides, only to hear him telling his boss about his plans for the future, including buying a house and settling down. Shawn is surprised he didn't know any of that. He tells Gus that they need to get out of there, fast, in order to beat Brannigan to solving the case.

While Gus is wrapping up at work, Shawn goes to see Henry to ask his advice. Henry thinks Shawn is breaking up with Juliet, but Shawn tells him of course not.  He tells Shawn that the day his wife left him was the best professional day of his life; he solved an important case and it took some of the sting out of the personal failing.

Back at the second victim's hotel room, Shawn realizes that the victim was a hitman and was killed by someone he knew, because he let them in. They find a map to a second location to dig. They arrive to find the soil has been disturbed; before they start digging, Gus asks Shawn to tell him what he hasn't been saying. Shawn, Tom Sawyer-like, convinces Gus to do all the digging, thinking that they're going to find treasure -- but its' a skeleton instead and Gus runs away screaming.

Shawn visits Woody at the morgue, where Woody is helping him figure out who the skeleton belongs to. It's a land speculator and the first victim, a realtor, and his friend and partner (with whom Shawn had the conflict earlier) now seem like the obvious killers because they had just won a land auction that the speculator had wanted. Apparently the first victim's car was impounded after his death, though, and Shawn finds the murder victim hidden in it. Instead of taking it to the police, though, Shawn takes Gus to their high school to have their break-up conversation. Before he can finish, though, they're met by Ian (the suspect), who has a gun trained on them. 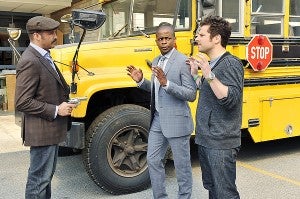 Ian tells them that he's been following them since they found the murder weapon and demands to know where it is; he's already cut the ignition line on Gus's new company car so they can't escape if they manage to run from him. Shawn tries to reason with him, but he says that killing people gets easier the longer you do it and he'll happily kill them. Shawn runs down his theory that he killed his rival in the land deal three years ago, then had his partner killed when he tried to use the murder weapon (also buried) to blackmail him, before finally killing the hitman. Shawn tells him that he needs to admit something to Gus -- he tells Gus that he (Shawn) stole a bunch of spiced flaxseed from the kitchen at Gus's new job. Gus is confused and annoyed that this is going to be the last conversation they have, but Shawn throws a handful of flaxseed in the gunman's face. the two make a run for it, failing to find anyplace to get into the building, before finally stealing a driver's ed car that's parked nearby. It's the same car, incidentally, that Shawn had stolen for a joyride back in high school. They use it to evade Ian for quite a while as Shawn calls Henry for backup.

Henry, though, is teaching a class for his ex-partner at the local college and doesn't answer (because of course he's busy bickering with college kids who want to prove how smart they are from working online. He quizzes the student the same way he used to quiz Shawn: close your eyes and tell me the details of the room. The student can't. Finally, Henry gets his text and takes the students of the class on a "field trip" that ends with him shooting out Ian's tires and making the arrest, thrilled that Shawn finally called him. 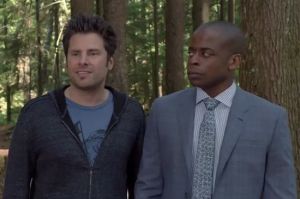 Shawn still doesn't deliver the whole "breakup" because he's distracted by how Henry is hamming it up while he presents Ian to the police who are arriving on-scene.

Finally, we see why Shawn has been talking at the camera all episode: he's been recording his confession to give to Gus, since he can't do the break-up in person. We see Gus watching the video on his office laptop, looking shocked and hurt as Shawn admits to how bad he is at "the real stuff." He tells him that he can't help thinking that Gus's only real problem for all these years was Shawn, that he's held him back for eight years playing detective. He tells him he loves him and walks off camera, wher eyou can see him emptying out the Psych office. Gus goes there to look for him, and finds Henry, who got a siimlar DVD.

Gus asks Henry what he's supposed to do with the office, and Henry tells him that he's sure someone will figure out a use for it -- and pulls out a measuring tape to start sizing up the joint.

Shawn has sent DVDs to everyone -- including a cop he's never spoken to, played by Val Kilmer. Most of them are about what you'd expect, but the particularly touching one is to Lassiter; he thanks him for always having Juliet's back, and admits that he isn't really psychic. Before he can finish the sentence, though, Lassiter ejects and shatters the DVD.

Brannigan comes into Lassiter's office with a request for her new partner: it's McNabb, whom she hopes to rehab from the lowest-scoring detective's exam ever into a real cop.

As soon as they leave, Lassiter calls his wife and asks her to put the baby on, then baby-talks to it.

Shawn arrives in San Francisco and meets up with Juliet at a crime scene.. Chief Vick joins, furious that Shawn is disrupting the crime scene. She starts to tell him that things are more structured in San Francisco than in Santa Barbara, when Gus storms in yelling at Shawn. He reveals that he walked away from his "perfect" job when he realized that he hasn't really moved up in the world; he's still underachieving. Psych has changed his life, and if he needs to move to another city to hold onto that, so be it. He had a momentary doubt, but he turned back just to turn in the company car and then introduce himself to the girl he's interested in. He moves in for a kiss and she rejects him, then maces him in the eyes.

Eventually, Gus stole the driver's ed car and drove it up the coast.  Shawn plans to set up shop in San Francisco, but Vick warns him that they already ahve a consultant; he's in the kitchen alphabetizing the pantry. They all hug, and when Shawn goes outside, he immediately proposes to Juliet. Gus keeps interrupting the proposal, but it doesn't deter her.

As he's handing her the ring, though, somebody runs by and steals it, then gets into a car. The three of them pile into the driver's ed car to give chase.