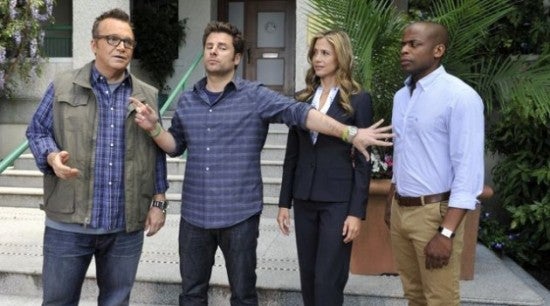 The episode opens with Shawn throwing lunchmeat at a photo of a man he refers to as Professor Stein on a dartboard.

When Gus comes in and asks him what's going on, he explains that Stein has rejected Shawn's application -- for the fourth year running -- to a convention for paranormal consultants. The gathering would raise Shawn's visibility and help his career, and he's shocked Gus doesn't remember previous years when Shawn had this problem. A quick burst of flashbacks reveals that over the last three years, Gus has always claimed to have met the woman of his dreams this particular week in March and is not interested in Shawn's problems.

This year, he's there for Shawn...and points out that, had Shawn read the letter he received, he would know that it wasn't a rejection but an invitation. 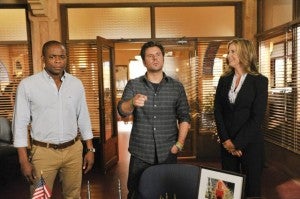 In Lassiter's office, he's just met the new head detective, who is extremely capable, but eccentric. She's crafting while they talk, which throws him way off, especially when she gives him a necklace she made for him.

When Shawn and Gus arrive at a college where Stein is holding his gathering, they're met by his assistant; before they make their way indoors, they see a hysterical man being dragged away by security demanding to talk to Stein. Inside, Stein's assistant reveals that the man is James Earl Craig, a former psychic advisor for the Los Angeles Police Department who was cut loose and whose life fell apart when Stein outed him as a fraud last year.

When Shawn heads into Stein's office, the professor won't shake hands (he's afraid of germs) and isn't impressed by Shawn's over-the-top attitude. He introduces Shawn and Gus to a pair of other panelists who will present with Shawn. One is Hazel, a Wicca consultant, another is Garth, a man who speaks with ghosts -- and apparently has one with him. When Stein heads out onstage to introduce the trio, Shawn grills Garth about his ghost (Bernie) and Hazelwho is a supporter of Earl, storms off after accusing Shawn of being a fake.

Stein brings the other two to the stage, but collapses midway through Shawn's introduction and is dead when they come out onstage. 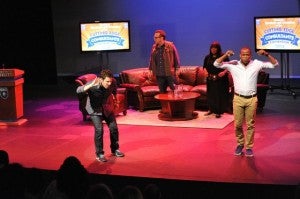 Lassiter and Head Detective Brannigan join the scene, and Brannigan is honored to meet SHawn and Gus but wants to get the other consultants out of there. When she steps away for a moment, Lassiter tells Shawn he can't stand how perky and sugary-sweet she is, and she has to go. She's so by the book that he decides the way to get rid of her is to hire all three of the eccentric consultants, and hand them off to her. Shawn, he says, is to ham it up as much as possible to startle her.

In the morgue later, Lassiter joins the consultants and Woody. He hands her off to them and then leaves. Shawn and Woody figure out that there was topical poisoning applied shortly before his time of death, and when Shawn breaks into his office, he finds hand sanitizer, seemingly implicating Stein's assistant Randall. By the time he gets back and tells Lassiter and Brannigan, though, she's already arrested Randall on the advice of Garth and Bernie.

At the police department, Lassiter lets Brannigan take point on the interrogation, since it was her collar, but he's still hoping Randall won't be the killer as it will hurt Brannigan's credibility. When she lays out his motive as having been disrespected for years, Shawn figures out that he's not the killer since Randall was going to get a tribute later in the presentation. A phone call from the lab bears this out almost immediately, as the hand sanitizer is clean.

Shawn thinks James Earl Craig is the suspect they want; Hazel doesn't believe it, but Garth does. Luckily, Shawn knows where to find him. He's down by the beach, giving readings to tourists. Shawn and Gus talk to him, and he tells them that he was there to prove to Stein he was back on track--that Stein's blessing was the only thing that could save his career. He also says that Stein was shacking up with a girl when Craig went to see him there. Shawn and Gus go to his house, where Shawn finds evidence that Stein was having an affair with Hazel and assumes that was the motive for her to kill him. He gets a text from Randall promising new evidence, but when he gets there, Hazel is waiting and Randall has been poisoned. 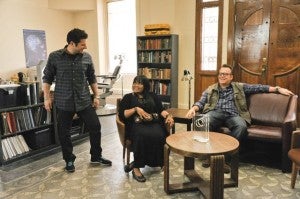 She admits to the affair but tells Shawn that she just came to apologize to Randall for having him arrested, and then found him dead. She punches Shawn and Gus in the gut and then runs when they double over.

Brannigan and Lassiter come, and Shawn and Gus make up an insane story about having been turned into a chicken and a rubber tree in order for her to make her escape. Brannigan, who didn't believe Hazel was guilty, gets upset by all of it and goes back to the station to rethink things. Shawn and Gus head to the beach, where they find Hazel hiding in a janitor's closet with James Earl.

Garth shows up, and Shawn proposes that the group team up "like a sad version of The Avengers," clear Hazel's name and find the real killer. Garth, whose ghost is suffering from alcohol poisoning and throwing up, hangs back.

They bring Hazel to the police department and tell Lassiter that Hazel is innocent. Woody figured out the time of death, during which time Hazel was with James Earl Craig. Lassiter asks them (joined by Garth) to present an absurd, over-the-top theory to Brannigan to help force her out. Shawn agrees, in spite of his better judgment. As they're together chanting, James Earl joins them...briefly, before he drops to the ground, poisoned.

Earl isn't dead, though, and on his way to the ambulance, James Earl shows him writing on his palm: an address which, per earlier clues, points to Garth. Shawn presents his theory for everyone, saying that the "haunted" house Stein bought from Garth was not haunted and that Stein was planning on debunking Garth at the end of the presentation, which would have ruined him like it did Craig. Desperate, Garth accuses Bernie for the crimes, but Lassiter and Brannigan arrest him on the spot. Obviously.

Back at headquarters, Lassiter is pleased to tell Shawn and Gus that Brannigan is requesting a transfer. When he goes into his office, though, she tears up the request and comes out: she's basically a female Lassiter. Just as crazy as him and now prepared to stop being inhibited and by the book. Lassie tells Shawn and Gus that he can make this work, and the pair are upset at the prospect of having to work with Lassiter and his "clone."

Psych Recap: A Touch of Sweevil Is "Like a Sad Version of The Avengers"