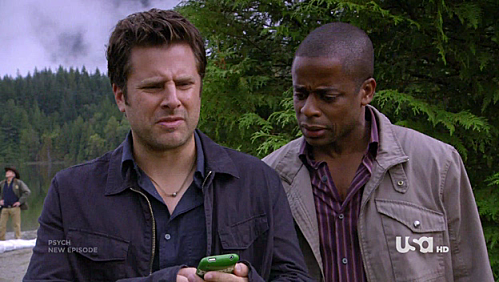 The long-running USA Network comedy Psych will complete its run at the end of this season, USA confirmed today. Its final episode will air on Wednesday, March 26. The finale will be followed by a one hour live Pysch after show featuring a Q&A with the cast and show creator, Steve Franks.

Originally renewed for an eight-episode eighth season, two more scripts were greenlit over the summer, bringing the season total to 10 and the series total to 121 episodes, four shy of Monk, USA's longest-running series. Another long-running USA series, Burn Notice, was cancelled last year. Both Burn Notice showrunner Matt Nix and Psych creator Steve Franks are said to be developing new series with the network.

According to Entertainment Weekly, the producers weren't certain until very recently that the show was officially going to end, but (as happened with Leverage) they assumed as much and wrote the finale as though they were ending the series.

Series stars James Roday and Dule Hill released a video message to fans earlier today, officially announcing what long been suspected. You can check it out below.

USA Network President Chris McCumber issued a statement confirming the end of the series today shortly after the news broke, but suggesting that the two characters at the heart of the show may not be gone for good. After the success of this year's Psych The Musical, can fans expect a few more TV movies, perhaps? It worked for Columbo for years.

"Psych has made an indelible imprint on the television landscape, with a unique brand of comedy," McCumber said. "The final season celebrates the iconic characters that have made this show so beloved, and will be an exclamation point on the series' incredible run. And while the series will wrap in March somehow I don't believe we've heard the last of Shawn and Gus."

With both Maggie Lawson and Timothy Omundson taking jobs on other shows, any doubt fans had that Psych would be back in another year was more or less scratched already, barring the kind of massive creative reboot that gave Scrubs an extra, largely Zach Braff-free year.

Franks and the show's writers have already chimed in on Twitter:

It has been an amazing joyride these last eight years. Thanks to everyone who tagged along for the journey.

It's over. And what a run. We're grateful for everything, but mostly the Psychos. Best fans in television. See you soon. #farewellpsych

Franks has long said that the series finale would be the wedding of Shawn and Juliet, which may blow a little bit of the reveal--except that the March 26 episode is titled "The Breakup," according to IMDb.

Psych To End Next Month, USA Confirms--But Shawn and Gus May Return