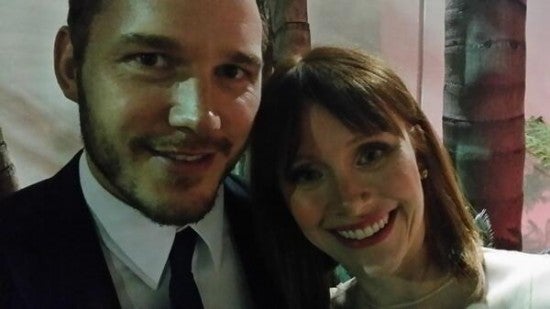 Chris Pratt, who has gone from sitcom loser to action hero following roles in Zero Dark Thirty and Guardians of the Galaxy, will play a lead role in Jurassic World.

Producer Ron Howard, whose daughter Bryce Dallas Howard will also appear in the film, tweeted out the picture above last night, noting that Pratt had just met his co-star on the red carpet at the Golden Globe Awards.

While still not an official announcement, Howard is both one of the most prolific and well-liked producers in Hollywood, and the father of one of the film's stars--which puts him in a position to know. His was one of dozens of names in the mix for Jurassic World according to the press, although it's hard to say whether that was ever going to happen.

Bryce and Chris meet for the 1st time on red carpet they will be co-stars in next Juraissic pic.twitter.com/Pu1nUI9SNG

Guardians of the Galaxy's Chris Pratt Cast in Jurassic World

Kobe Bryant: Here's What Lakers Memorabilia Is Being Auctioned Off