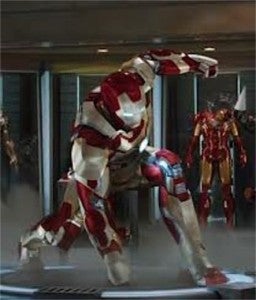 The 2013 Kids' Choice Awards are scheduled to air on Saturday, March 23 starting at 8 PM ET. So you know what that means?

Yes, another Iron Man 3 commercial trailer. Nickelodeon has a fifteen second teaser on Nick.com for the full commercial which will air during the awards show.

The teaser shows Tony Stark suiting up as Iron Man and doing a flip in the air. In the background, Robert Downey Jr. says, "People call me a superhero. I build neat stuff and occasionally save the world. Maybe you've heard of me. I'm Iron Man."

Amanda Bynes' Parents Have Reportedly Not Met Her Fiance

Ryan Newman Is Thumbs up in Newly Revealed Photo With Martin Truex Jr. After Hospital Release