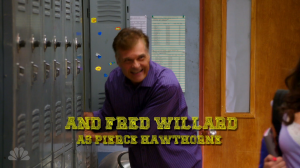 The video of Community's full PaleyFest panel is now available on Hulu (embedded below), and among other things, fans can see some discussion on what the new showrunners will do without Chevy Chase in season five, if one is ordered by Sony Television and NBC.

The answer? Replace him with Fred Willard.

Willard, who played Chase's character Pierce Hawthorne in a show-within-a-show that Abed was fantasizing during the cult hit's series premiere in February, is apparently the favorite choice of casting director Tristram Shapeero.

Executive Producer David Guarascio added, "I think we've proven we can just say it's Pierce and move on."

Given the fact that Chase had already exited the series before Willard's episode aired, a number of fans on social media sites expressed variations on that same basic idea: Community exists in a world where it would be perfectly reasonable to replace Chase and have no one except Abed acknowledge the change.